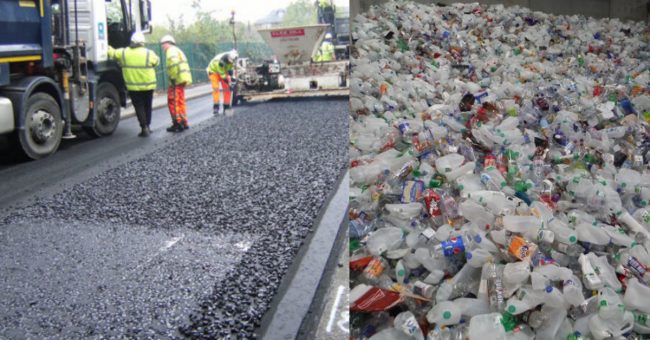 Since its creation in 1907, plastic has been all around us. Nowadays, plastic is critical to modern life, as it is used for most things we use daily.

It made possible the development of most of the lifesaving advances of modern time. Being inexpensive, plastics raised the standard of living and made material abundance more readily available.

Despite its role in the advancement of our society, plastic has become a huge problem these days. It has become a threat to our planet, including humans, flora and fauna, and the environment.

The dangers of plastic use to the environment is now a worldwide problem. Yet, experts are still trying to find the best solution to plastic pollution.

To reduce the negative impact of plastic pollution on our planet, a UK company, MacRebur, found a way to use old plastic bottles to improve the quality of roads. The asphalt made in this way will be cheaper and more durable.

Its CEO, Toby McCartney, got the idea while he was working in Southern India. After wondering why people there collected old plastic, he was told that they melt the plastic and turn it into filler for the potholes.

The MacRebur asphalt boosts the lifespan of the material, but at the same time, it is environment-friendly, as it reduces the carbon footprint by reducing the amount of fossil fuel used in the manufacturing process.

Most kinds of plastic can be used for this asphalt, including the most difficult one to recycle – black plastic.

“We went through about five-to-six hundred different designs of different polymers that we were mixing in before we found one that actually worked.”

The plastic used for it must be labeled as waste, not new or recycled, and it must melt at a specific temperature. The new plastic road would be more flexible, and it will sustain heat, cold and everyday weather damages better.

Being an enhanced asphalt form, it will last much longer than traditional asphalt roads. McCartney maintains that plastic roads are 60% stronger than traditional roads, and lab tests project these roads may last up to three times longer. Yet, only time will tell if they withstand wear and tear as said.

The mixture can be applied to car parks, race tracks, airport runways, and motorways as well.

“We are wanting to solve two world problems. On one side we call it the waste plastic epidemic, and on the other side the poor quality of roads that we have to drive on today.”

UPS Drivers Have A Facebook Group About Dogs They Meet On Their Routes, And It Will Make Your Day