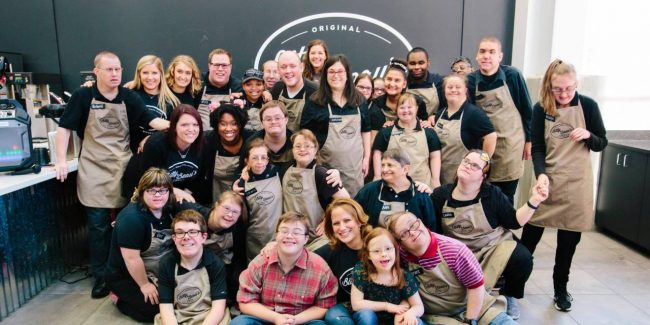 In January 2016, Wilmington, N.C, Amy Wright, a mother of two children with Down syndrome, Bitty and Beau, opened a coffee shop and named it after them.  This woman was aware of the large number of unemployed adults with intellectual and developmental disabilities and decided to make a change.

“It hit me like a lightning bolt: a coffee shop! I realized it would be the perfect environment for bringing people together. Seeing the staff taking orders, serving coffee -- they’d realize how capable they are.”

With more than 80% of people with intellectual and developmental disabilities (IDD) unemployed nationwide, this coffee shop created a path for them to become more valued, accepted and included in every community.

It initially had 18 employees, and this number increased to around 40.  In 2017, due to her advocacy work for people with disabilities, Wright won the CNN Hero of the Year award, which included $100,000 toward her cause.

“Creating this has given people a way to interact with people with disabilities that (they) never had before. This is a safe place where people can test the waters and realize how much more alike we are than different. And that’s what it’s all about.”

In February 2018 in Charleston, S.C., the second location of Bitty & Beau’s Coffee opened, and it now employs about 80 people.

And on January 20, the ribbon-cutting ceremony of the third Bitty & Beau’s Coffee took place in Savannah, Ga. It will be open daily from 8 a.m. to 6 p.m. This place has attracted some famous clientele, and is the official coffee of the “Rachel Ray Show.”

Wright revealed that she plans to open shops all over the country in the next few years:

Here you can find more photos: Coffee Shop Run by People With Down Syndrome to Open Its Third Location

5 Ways To Make Turmeric Drinks To Reduce Pain And Inflammation