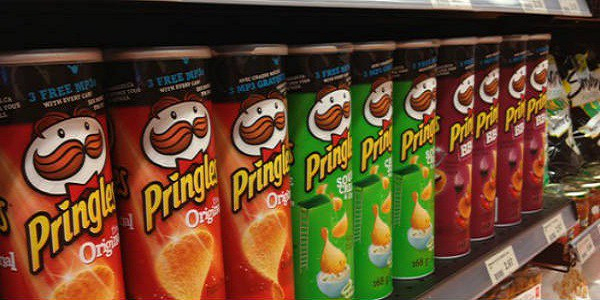 Pringles are one of the most popular chips all over the world, so we regret to inform you that they are something you must avoid at any cost!

Apparently, this can of chips is extremely harmful, as it is loaded with carcinogens and toxins.

What you may also not know is the fact that such salty snacks like Pringles are not even close to potatoes. In the process of production, manufacturers use potato flakes, corn, and wheat.

They mix these ingredients in the initial phase of production, in a form of dough, and then press them onto molds. Afterward, they are added in boiling oil until they are blown dry. In the end, producers spray them with powdered flavors and pack them into cans.

During the process of production, the most harmful ingredient which ends in these chips is actually a by-product, known as Acrylamide. This is an extremely dangerous carcinogen, which is known to lead to cancer in the case of animals.

Also, in certain doses, it is toxic to the nervous system in both, animals and humans. The most shocking fact is that this substance is in much higher amounts in these chips than allowed.

Acrylamide is created in the process of preparation of foods at high temperatures. Regardless of the fact whether the food is roasted or baked if the preparation process is conducted on such a heat to make the surface of the food yellow/brown, this by-product is created.

Hence, all foods cooked at temperatures higher than 100˚C ay include this toxin.

Being loaded with this harmful ingredient, potato chips are an extremely great threat to your health. Due to all this, the state of California sued potato chips producers back in 2005, as they did not even warn customers about the health risks of this product and the ingredients it contains.

How To Pick The Perfect Watermelon: 5 Key Tips From An Experienced Farmer