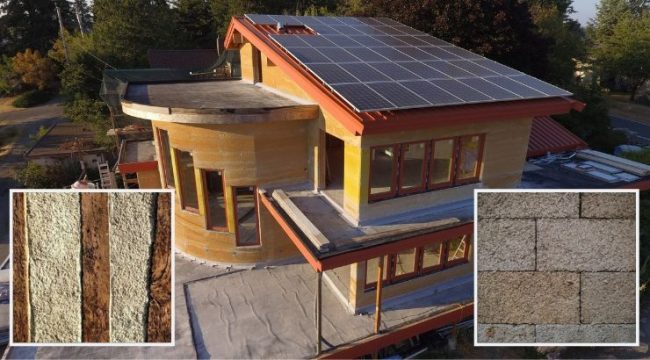 According to Bloomberg, cement manufacturers are responsible for about 7% of annual global carbon dioxide emissions.

Plus, the massive cement demand has created a global shortage of sand, the second most used natural resource in the world, surpassed only by water. This could have a disastrous effect on both the environment and the economy.

Despite greenhouse gas emissions concerns, the specific type of sand needed for concrete is often harvested from riverbeds, which destroys ecosystems and threatens the biodiversity of plants, fish, and animals.

Emerging tendencies, inspired by environmental and energy-saving criterions for building envelopes, refocus on the use of plant materials as bio aggregates in green concretes.

While it is still difficult to imagine a material that would completely replace cement in construction projects, the industry is considering alternatives for various environmental and economic reasons.

Surprisingly, hemp-based concretes are one of the most environmentally sustainable alternatives to conventional concrete.

After harvest, hemp continues to absorb greenhouse gases as it’s mixed with lime or clay.

Manufacturers claim they’ve struggled to find markets for greener alternatives, giving easy entree to entrepreneurs who cater to customers concerned about their impact on the Earth, like the owner of JustBioFiber Structural Solutions, 64-year-old Mac Radford.

This Canadian company is using hemp to create a cement they call “hempcrete” pic.twitter.com/Ff6SjOj5Xs

His company is one of the leading manufacturers of hemp-concrete, claims that there has been a huge increase in the demand for this material recently, so he is facing a hard time to keep up.

He adds that once his recent expansion is completed, his company will be producing enough hemp brick to build about 2,000 homes annually. His company is already making a profit, and he expects it to continue to expand after a new $28 million investment.

JustBioFiber claims that its hemp captures 130 kilograms (287 pounds) of carbon dioxide for each cubic meter it builds. Those structures made with their bricks will sequester more greenhouse gases than they emit in production.

Hempcrete was initially developed in France, about three decades ago, when it was initially used for renovating old houses since it mixed well with stone and lime.

Yet, its use dates back as far as ancient Rome when it was mixed into the mortar used to build bridges.

Modern builders have started considering it for large projects only recently, but despite being better for the environment, it is more resistant to fire, regulates temperature better and offers better ventilation than conventional concrete.

Quentin Pichon, the founder of CAN-Ingenieurs Architectes, a company specializing in hempcrete, said that this material was even used in the construction of a seven-story municipal building.

In case the construction industry fully adopts a renewable alternative like hemp, it will certainly solve numerous social, environmental and economic problems.

Stunning Pictures Depict A Lizard That Fell Asleep Inside A Rose