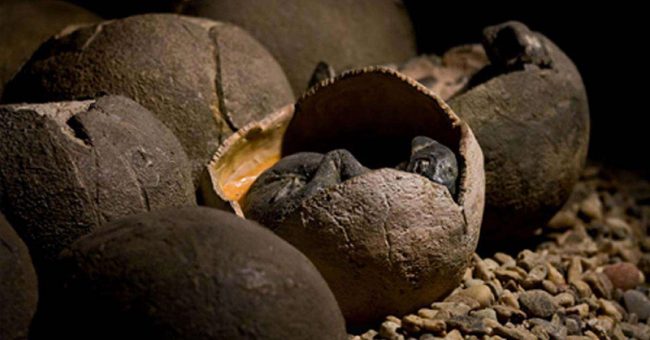 Dinosaurs have always fascinated us all, from an early age. Kids love dinosaurs, and many are even obsessed with them. They know their long, scientific names, the food they ate, where they lived, and what they looked like.

Some children even know the difference between the Mesozoic era and the Cretaceous period.

If you have been intensely interested in dinos as a kid too, what would you do If you found something connected to these huge reptiles back then? It cannot get any better!

The little boy was searching for something to crack open walnuts with while playing on the bank of the Dong River, from Heyuan in the Guangdong province of China.

Then, Zhang spotted some odd-looking rocks, and saw a piece of rock that “looked special”.It was buried in the red soil and he dug it up very carefully, believing it was a piece of cement.

The boy has always loved science and dinosaurs and had read numerous books about them, so he somehow suspected that it might be a dinosaur egg. Zhang said he recognized the pattern after seeing similar fossilized eggs at the museum.

“I have learned this knowledge in the books and the cultural corridor of the school. I have seen it in museums. Different dinosaur eggs have different shapes.”

He showed it to his mother, Li Xiaofang, explaining that he remembered the pattern from a recent to a local museum’s dinosaur exhibit.

“The bridge over the river has been damaged by the flood, and the soil below the abutment was exposed. He found an eggshell on the slope (of the broken bridge) and called me immediately to tell me about his discovery, saying it seemed like a dinosaur egg.”

Li called the police and then stood guard at the site until the arrival of authorities.

Experts from the Heyuan Dinosaur Museum confirmed that the rock was a fossilized dinosaur egg, and after excavating the site, they discovered 10 more.

This means that the boy has found a nesting site.

Experts believed the eggs are from the cretaceous period, about 66-million years ago, just before the mass extinction. They are about nine centimeters, or three and a half inches long, and have been added to the Heyuan Dinosaur Museum’s collection of over 10,000 dinosaur eggs, which is the largest collection in the world.

Heyuan is known as “The Home of the Dinosaurs”, as numerous fossils and fossilized dinosaur remains have been discovered there. The first time experts discovered a dinosaur egg was in March of 1996, near the Dong River. Since then, over 17,000 eggs have been found throughout the city.

Abandoned Newborn Baby Dumped In A Pile Of Rubbish Found Alive By The Road, After Man Walking By Hears Her Cries

This Shipping Container Design Is Now Being Built As A Home In The California Desert.