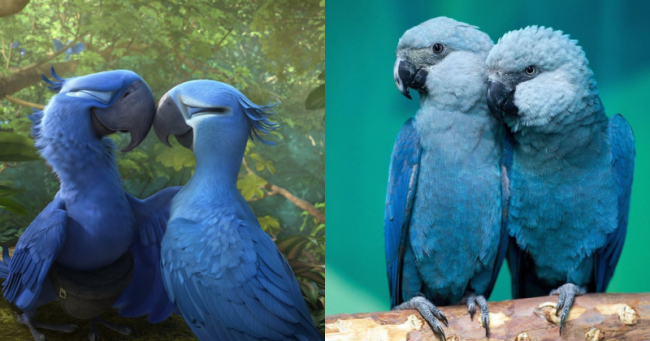 If you remember the movie Rio and Blu, the Blue Macaw that thought he was the last of his species, you should know that his nightmare has unfortunately come to life.

In the animated movie, this Brazilian bird, also known as the Spix’s Macaw, flies all the way from Minnesota to Rio de Janeiro as the last living male of his species, where he meets Jewel, the last living female, lives. The parrots ultimately fall in love, have a baby, and manage to save their species.

However, in the real world, this didn’t happen.  Seven years ago, this parrot species was declared endangered, and is now officially extinct in the wild.

A study conducted by the BirdLife International found that it can no longer be seen in the wild, and it only exists in captivity but again, in extremely few numbers.  Its extinction came as a result of the rise in deforestation and constant loss of habitat, and they are not so adaptive and lived near dominant species and predators.

There is no official proof that they still exist in some breeding programs neither.

In the 1980s, Tony Juniper penned a book called “Spix’s Macaw: The Race to Save the World’s Rarest Bird”, with the aim to raise awareness of the situation with these parrots. Yet, people didn’t care enough to stop then.

Moreover, this week, the statistical analysis by BirdLife International declared seven other bird species extinct too, five of which belong to South America and were victims of deforestation and excessive human interference. Three species, the cryptic tree-hunter and the Alagoas foliage gleaner from Brazil and Poo-Uli from Hawaii, are now gone forever.

According to Stuart Butchart, BirdLife’s chief scientist and the paper’s lead author:

“Ninety percent of bird extinctions in recent centuries have been of species on islands. However, our results confirm that there is a growing wave of extinctions sweeping across the continents, driven mainly by habitat loss and degradation from unsustainable agriculture and logging.”

It is a fact that all of these extinctions were a result of human interference.

When will it be enough? What should happen for people to finally understand that they need to respect the life, habitat, and privacy of other animals?