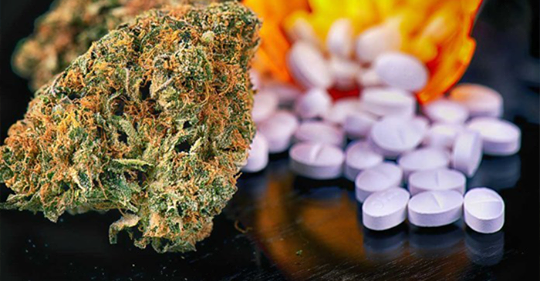 Medical mari*uana, or cannabis is taking the medical world by storm since it has been confirmed to be a successful treatment for conditions like epilepsy and chronic pain.

Scientists are exploring its effects in the treatment of nausea, pain, anorexia, depression, and insomnia, and their findings show the possibility of cannabinoids to relieve the negative side effects of chemotherapy and to have a direct anti-cancer effect on the body.

Cannabis contains over 100 active components, and THC (tetrahydrocannabinol) is the chemical that causes the “high” feeling that goes along with its consumption. Yet, CBD-dominant strains have little or no THC.

The most common use of medical mari*uana is for pain control, and it has proven to be quite effective for the chronic pain that plagues millions of Americans. It is also clearly safer than opiates and can replace NSAIDs like Advil or Aleve, especially if people cannot take them due to GERD, ulcers, or kidney issues.

Numerous people have reports the benefits of CBD for relieving spasticity, anxiety, insomnia, depression, and pain, as well as in the treatments of potentially life-threatening conditions like epilepsy.

Cannabis is a scientifically confirmed muscle relaxant, so numerous sufferers swear by its ability to relieve tremors in Parkinson’s disease.

Researchers also investigate its effects in the treatment of fibromyalgia, endometriosis, interstitial cystitis, and numerous other conditions where the final common pathway is chronic pain.

Therefore, medical cannabis has a huge potential for medical relief, but the prescription of cannabis and cannabis products is entirely illegal in the majority of the United States.

It would be absolutely reasonable for our country to allow the use of this natural substance that can effectively treat ailments with fewer negative side effects than common drugs, but apparently, there is another reason behind all this.

And you may have suspected it, as money apparently makes the world go round.

The Analytics firm New Frontier Data conducted a study which explored the effects of the introduction of cannabis to medicine is impacting two things beyond health: economy and industry.

According to Giadha Aguirre De Carcer, CEO and founder of New Frontier Data, if cannabis was to be adopted nationally, we would witness a trend of patients turning to medical cannabis as a substitute or complement to drugs.

A 2016 Health Affairs study which analyzed the sales of more conventional drugs used to treat these conditions, found that states which had legalized medical cannabis saw an 11 percent decrease in such drugs.

New Frontier Data used those statistics to reveal the potential overall monetary impact if the treatment became fully legalized in all 50 United States. They concluded that the total amount of money lost to the drugs companies could reach up to $18.5 billion between 2016 and 2019.

Aguirre De Carcer in New Frontier Data’s published report says that the U.S. constitutes 35 percent of the global pharma market, which is the biggest market globally, and a major driver of its economy.

Yet, even though this amount of money is huge, he explains how going up against the largest international industry in the world, medical cannabis would be nothing in comparison to the impact on the total pharma industry.

He believes that medical cannabis could have a serious impact on the highly profitable sub-markets for pharma companies like chemotherapy symptoms and chronic pain.

Yet, this explains why the national legalization might be continually stalled by the economic machine called Big Pharma.