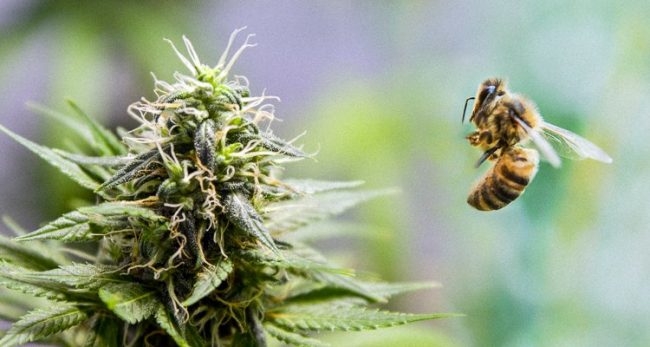 The entire world is worried by the alarming decline in bee populations since the 1990s. At the same time, numerous scientists investigate hemp and its potential environmental benefits.

Now, researchers have combined these popular issues of modern society in one study: cannabis, and the suffering bee population.

The study conducted at Cornell University and published in Environmental Entomology has discovered that the taller the hemp plants are, the more bees will flock to it.

This study confirms the findings of a previous study at Colorado State University.

Researchers have found that cannabis is highly attractive to bees, due to its rich pollen stores, so scientists have to find a way to use it to help the struggling bee population.

The study suggests that the larger the area covered by hep, the higher the chance that bees will swarm to the place. Also, taller plants attract more bees, and the tallest ones attract even 17 times more bees than the shortest ones.

As time went on, researchers noticed that more bees visited the plants, and they did it more frequently. They made repeated sweep net collections of bees visiting hemp flowers on eleven farms in the Finger Lakes region of New York state.

They found that hemp can support 16 different bee varieties in the northeastern United States, and the most commonly captured were A. mellifera (European honey bee – 60%) and B. impatiens (common eastern bumblebee – 30%).

The pollen made by male hemp flowers is extremely attractive to these subspecies, but researchers do not know the cause of it.

Yet, this is not the case with female flowers, which are the ones people use for their soothing and intoxicating effects, as they don’t produce any actual flowers.

According to the study’s authors:

“The rapid expansion of hemp production in the United States… may have significant implications for agroecosystem-wide pollination dynamics.

As a late-season crop flowering during a period of seasonal floral dearth, hemp may have a particularly strong potential to enhance pollinator populations and subsequent pollination services for crops in the following year by filling gaps in late-season resource scarcity.”

These findings are if vital importance as they can save the declining bee populations across the United States and help agriculture and nature.

The authors of the study pointed out that there is no risk of the entrance of cannabinoid-rich pollen into our diets. They also added that the honey produced by bees won’t be enriched with tetrahydrocannabinol (THC).

This is their conclusion:

“Hemp is a high pollen-producing crop flowering during a period of floral resource scarcity and supports a diverse array of bees in the northeastern U.S. landscape.

The rapid expansion of hemp production in the United States (Schluttenhofer and Yuan 2017) may have significant implications for agroecosystem-wide pollination dynamics. The potential for hemp to serve as a floral resource for bees is influenced by landscape composition, the height of hemp plants, and temporal factors.

Growers, extension agents, and policymakers should consider risks to bees as pest management practices are developed for this crop (Cranshaw et al. 2019).”

The presence of cannabinoids in hemp pollen is “not likely to have an impact on bee development due to the loss of cannabinoid receptors in insects.”

What Happens When You Don’t Wash Your Sheets