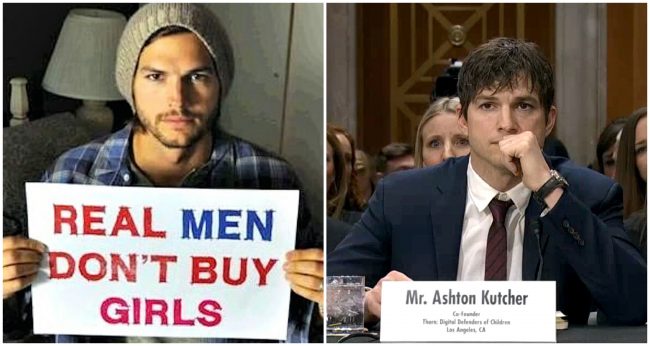 Ashton Kutcher is probably your friend’s favorite actor, but we bet you don’t know anything about his other activities. Kutcher gained an army of supporters throughout his career, and it seems like this number is on the rise. Wonder why? It’s all about his efforts to help victims of human trafficking.

The organization’s 2017 impact report confirms that Thorn has shut down the plans of 6,608 perpetrators. The Stop Sextortion campaign was really successful, and the organization had success in educating 3.5 million teens.

Previously known as DNA foundation, Thorn was started in 2009. Kutcher’s ex-wife, Demi Moore, did her best to shrink the market that exploits children for sex. Kutcher and Moore were well aware of the fact that this problem got out of control in the past decade, and social networks added fuel to the fire.

Kutcher talked about his organization and their success in many interviews. He explains that the main target is to create technology that fights sexual exploitation of children. Instead of saving one person, Kutcher prefers creating a method that helps one person to save many others.

In February 2017, the actor held a 15-minute speech of modern-day slavery to the Senate Foreign Relations Committee. His only goal was to compel the Congress to make bolder steps and put an end to the misery many women and children go through.

Kutcher spoke about the rights we have, adding that these rights are violated on a daily basis. The actor didn’t forget to mention that some people have criticized his efforts, demanding that he sticks to his acting. Well, maybe he should keep repeating that his organization saved 6,000 children.

Yes, Your 8-Year-Old Should Know How to Do Laundry