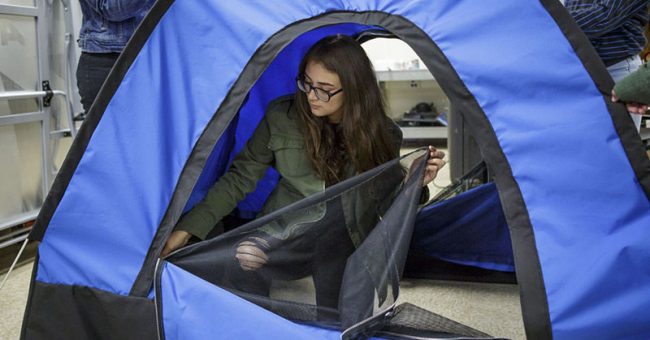 An engineering team of high school girls invented a solar-powered tent only for the homeless.

Success takes time, sacrifice, devotion, and hard work. A group of high school girls had all of these- and they were victorious! Unfortunately, homelessness is on the rise, and back in 2017, a group of high school students, all girls, decided to address the issue in their own way.

They could not help these people out there on the streets financially, so they initially felt hopeless.

“Because we come from low-income families ourselves, we can’t give them money.”

Yet, they didn’t stop there, and thought of another way to help! These determined girls decided to satisfy another need of the homeless, and provide them a warm shelter for the night!

In the end, they managed to create a tent powered on solar energy, which folds into a backpack for easy travel.

They worked on its design for a full year. The team of 12 girls from San Fernando High School partnered with DIYGirls, which an organization that supports girls in science, technology, engineering, math, and STEM.

They worked hard to create an easily portable, lightweight tent, with LED and antibacterial UVC lights that disinfect it. The tent itself is made out of durable and water-resistant material.

Plus, they made sure they could patent it, and that it will end up in the hands of those in need. The girls wanted to help as many people as possible, starting with the homeless from San Fernando to refugees who have lost their homes.

Former executive and program director and current board member at DIYGirls Evelyn Gomez was eager to help out from the moment she found out about the project.

She has also graduated from San Fernando and then studied engineering at MIT and UCLA.

She knows, from personal experience, the importance of supporting girls and Hispanic students in this field:

“I know in my own education, through undergraduate and graduate school, I was often the only Hispanic person in the room. I think it really places a big burden on your shoulders: I’m not just representing myself, I’m representing my people, I’m representing my community, and if I say something that maybe … doesn’t make sense, then that’s going to reflect poorly on them.

That’s the beauty of having an all-girl team and having the beauty of working within our own community: We have no one else to turn to for answers. We need to come up with the answers ourselves. It’s very empowering.”

When the project started, most of the girls didn’t know each other. During the project, they became great friends.

At first, they depended mainly on Gomez, but over time, they became confident and independent, ready to work on their own. When they encountered a problem, they searched on Google and YouTube to find a solution.

The girls worked on the project six days a week, with no pause during the winter and spring break. Their invention had to undergo strict stress and quality control tests, and their first prototype failed. As a result, they had to start from the beginning again.

They eventually received a $10,000 grant from MIT, so they could showcase their invention at EurekaFest, a convention put on annually there, that presents the work of young inventors.

The feminine team hopes that their creation will eventually get mass-produced, and thus become available to as many homeless people as possible.

“These girls saw a problem in their community. If we have more young women and more people of color and more people from low-income communities that are able to identify a problem within our communities, then we’re going to be better equipped to solve those problems because we’ve lived through them.

Who runs the world? Girls!