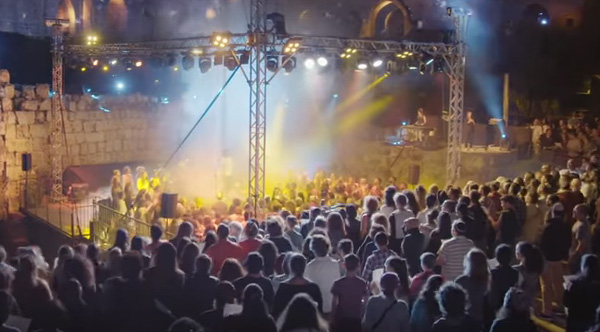 The power of music is limitless. Music unites, heals, comforts, and speaks. A social-musical initiative, Koolulam, believes in the potential of music, and its ability to inspire harmony in humanity.

It organizes mass singing events, attended by non-professionals, to spread the idea and bring people together.

On June 14th, 2018, the Tower of David in Jerusalem, was visited by hundreds of Jews, Christians, and Muslims, and they all sang Bob Marley’s “One Love” together.

The event was organized on the night of Eid al-Fitr, which is the end of Ramadan, the month of fasting and introspection in the Muslim religion, and in honor of the historical visit to Israel by Indonesia’s religious leader Sheikh Haji Yahya Cholil Staquf, who is also secretary-general of Indonesia-based Nahdlatul Ulama, the largest Muslim organization in the world.

Staquf contacted Koolulam after seeing some of their videos and told the organization about his planned trip to Israel. He added that he would like to participate in an interfaith social music event.

At the same time, the Tower of David and Jerusalem.com offered to sponsor such an event.

“It was an amazing confluence and fit our agenda that each person can be part of our events no matter where he comes from or what he believes. And what could be better than this historic location to host people of three religions singing together in English, Hebrew, and Arabic?”

When they entered the ancient citadel-turned-museum of Jerusalem history, people received lyrics sheets and were divided into soprano, alto and baritone groups. They had 45 minutes to learn their parts.

The song was interpreted in three languages, English, Arabic, and Hebrew, and in three-part vocal harmony.

“Let’s get together and feel alright..”

Real-life Santa: Army Vet, 80, Has Made Christmas Toys For Kids in Need For 50 Years