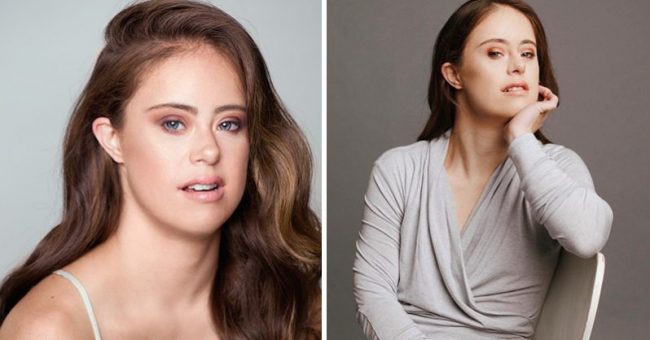 In spite of being raised in the spirit of “everybody is beautiful in their own way”, in reality, we became victims of the modern model of “perfect beauty”.

We are bombarded by the photos of ideally-looking models on a daily basis, and it seems that there is no room for any different-looking person.

Yet, Chelsea Werner, a gymnast from Danville, California, showed the world that one can be perfect in his own way. She has a Down Syndrome, a common chromosomal defect that leads to the delay of the intellectual and physiological development of a person.

She has earned her name as a gymnast, and gymnastics came to her life when she was four, as a way of strengthening her muscles.

Chelsea was unable to walk until she was almost two years old and always had low muscle tone, yet persevered to perform at a physical peak beyond many experts’ wildest expectations.

Soon, she became a champion gymnast, and gymnastics taught her new skills and infused her with confidence. Werner had participated in the Special Olympics United States National Championship, winning it four times and she had won the World Championship twice.

Yet, she explained that she has been at the top the Gymnastics World for numerous years and she still enjoys it, but when she got some great modeling opportunities through her gymnastics, she discovered she really loved it.

When she initially tried to follow her dreams in the fashion industry, she was always turned down. Yet, with the support of her family, she persisted, and her patience eventually paid off.

Due to social media, she was soon discovered by the company We Speak, an agency that operates with the motive of promoting body positivity and inclusion in the modeling world, and strives to create a positive change in fashion advertising by working with women who have a “positive outlook, healthy lifestyle, and unique features.”

Chelsea wanted to be the change in the modeling world, which had an underrepresentation of people with Down syndrome.

The founder of We Speak, Briauna Mariah, saw her bright, optimistic energy in a viral video.

From the moment she did her first photoshoot, Chelsea became a global sensation, and parents of children with Down Syndrome saw the ray of hope in her.

Chelsea said that the world of fashion is hard for all models. Yet, she had had a lot of challenges in her life and she never gave up. She says that she has a lot of people rooting for her and a good team behind her. She adds:

“I’m a very positive person and don’t see things as limitations. I’m pretty stubborn and work very hard. The way my parents raised me really made me feel good about myself.”

She showed the world that people with Down Syndrome are as capable as anyone else of doing whatever they want.

Mariah explained that Chelsea is a rapid learner, and she accepts feedback without being narrow-minded, and these two traits are especially important in the modeling world.

They are already making her portfolio and brand and testing her out in front of the camera, along with two fellow models with Down Syndrome, Maran Avila, and Madeline Stuart, who has already launched her own clothing line known as 21 Reasons Why.

Since 2016, Chelsea has been on the cover of Teen Vogue, walked in New York Fashion Week and travelled around the world for big-brand campaigns.

Chelsea maintains that people should abandon their misconceptions about people with disabilities, be fearless, and grab whatever they dream of.

“I hope my story helps others know that anything is possible. Everyone has challenges in their lives but it’s how you deal with those challenges that makes all the difference.”

We should all forget the fixed standards of beauty and focus on the unique beauty hidden inside all of us.

Woman Triples Size Of Her Lips To Be More 'Fashionable': "I Look Prettier With Bigger Lips"