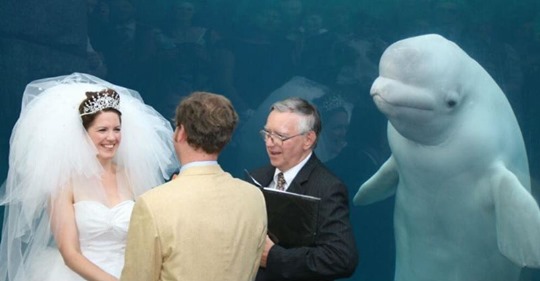 Humor is the best way to heal stress, anxiety, and boredom, as it brings new, positive energy in our everyday life.

Photobombs are universal, they know no language, origin, age, nor culture, and they are one of the best ways to have a good laugh. They are completely natural and honest moments captured without any effort, and they are amusing to people of all ages.

Many of the best photobomb moments feature animals, as these innocent creatures have no idea what’s going on when a picture is being taken, and they couldn’t care less what anyone thinks of them.

Also, with every great photobomb, there is the added delight of photoshop, that makes them hilarious!

One of the best photobombs ever was taken when a beautiful beluga whale decided to photobomb an about-to-be-newly-wedded couple as they took their vows.

The couple was tying the knot at an aquarium in Mystic, Connecticut when the curious animal swam over to see what all the commotion was about and upstaged the bride on the best day of her life.

The presence of the adorable creature on the picture of this sacred moment is undeniably funny.

While newlywed couples nowadays frequently go to Mystic Aquarium in Connecticut to get some photos in front of these huge creatures, this particular beluga caught the internet’s attention as this whale looks really invested in the ceremony.

Let’s just hope the beluga didn’t appear when the minister asked if anyone had a reason why the couple should not be married!

Photoshop experts found this hilarious, and have had a lot of fun with the image, which has racked up over a million views on Imgur. It was captioned: “Something old, something new, something borrowed, something Beluga.”

We all know it, the most amusing things in life happen without a plan, when we least expect them!