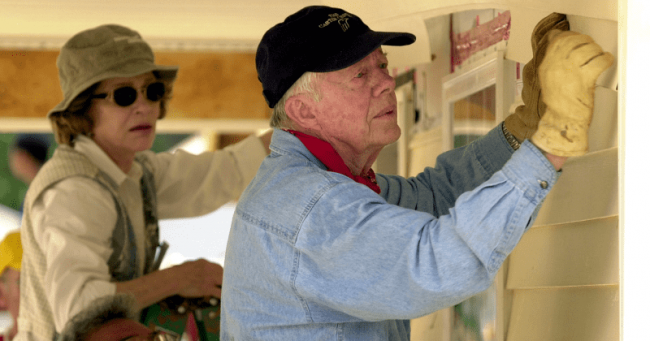 Jimmy Carter had a hip surgery last spring, but he is ready to build another house. The former President is 94 which makes him the longest living President of the US. He’s been helping build houses for more than three decades.

Carter joined forces with Habitat for Humanity, but his surgery forced him to take a break. Well, he won’t give up, and we will see him build some more houses after recovering from his procedure.

The former President and his wife, former first lady Rosalynn Carter, plan to build 21 new homes in Nashville, Tennessee, as confirmed by a spokeswoman for the Carter Center.

Bryan Thomas, a spokesman for Habitat for Humanity International, said the President Carter shouldn’t be counted out, because he always comes back.

The former President jumped back on his feet three months after breaking his hip in May. He has been a volunteer with Habitat for Humanity for 35 years. They build houses in the Park Preserve neighborhood of Nashville. Future Habitat homeowners and other volunteers have a role in the process, too.

Jimmy and Rosalynn Carter have landed a hand in the construction of more than 4,300 homes in 14 countries since 1984. Prior to his injury, Carter took part in the 2018 Carter Work Project in Mishawaka, Indiana.

The fracture sent him home, and doctors advised him to rest all the time. The former President had to put on hold his teaching classes at Sunday school. Believe it or not, he came back less than a month after his procedure. People at Maranatha Baptist Church were more than happy to have him back.

In 2015, Carter was diagnosed with cancer. Doctors noticed four spots of cancer on his brain. He wasn’t given much time to live, but Carter didn’t give up.

The Democrat was the 39th President from 1977 to 1981. He was a Georgia state senator and governor. Carter is a Nobel peace prize winner thanks to his work with the Carter Center and his criticism of wars. After his retirement, Carter spends his time doing charity work.

The Carter Center was established in partnership with Emory University. Carter taught at the university for three decades, and is a tenured faculty member of Emory.

According to the former President, the US is falling behind China because of all the wars. He explained that Chinese haven’t wasted a penny on war which puts them ahead of our country. America has lost $3 trillion. Instead of investing the money in railroads, bridges, roads and education, we invested $3 trillion in wars.