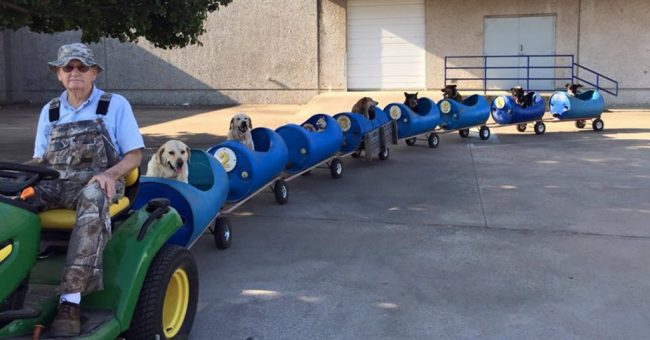 We all love dogs. Our furry companions are the most loyal creatures on Earth. However, an 80-year-old man, called Eugene Bostick, took his love for dogs to the next level!

Bostick, from East Fort Worth, Texas, lives on a huge 3-acre land with his family. As his home is located on a dead-end, people often leave their abandoned dogs there.

Yet, Bostick has a soft spot for stray dogs, and couldn’t leave those dogs to die out of hunger.

After his retirement, he had more time to dedicate to these dogs, and he took them under his wing. They made ” a place for the rescues to live”, started feeding them, took them to the vet, and let them in.

He even built them a train ever to take them on adventures and trips!

“I seen this guy with a tractor who attached these carts to pull rocks. I thought, ‘Dang, that would do for a dog train.’ I’m a pretty good welder, so I took these plastic barrels with holes cut in them, and put wheels under them and tied them together. Whenever these adorable dogs hear me hooking the tractor up to it, man, they get so excited.”

Eugene got the idea while deer hunting with a friend.

“He [my friend] had one of those barrels and used it to haul rocks. I had been using a trailer hooked up to my riding mower to take the dogs for a ride. I thought I could make cars for the dogs, put wheels on them, and drive them around.”

His brother, Corky Bostick, was willing to help and designed the seating, and the rest is history! The dogs simply adored the ride!

Eugene explained that they kept barking and jumping while carefully observing the road. Passersby found the sight incredibly cute, and many of them posted photos of the unusual vehicle on social media!

Back in 2015, a video of the Bostick brothers and their dog train went viral, with thousands of people marveling at their invention and care for the strays!

At the time, the brothers took their nine dogs for an hour-long ride twice a week. They even went along the Sycamore Golf Course, just at the back of their property, and Bostick said that the golfers liked to get a kick out of the train and the dogs!

Nowadays, the train is taking a break, and Eugene says:

“We get new strays all the time and I just haven’t trained them to sit in the train. But I plan to get right on that.” 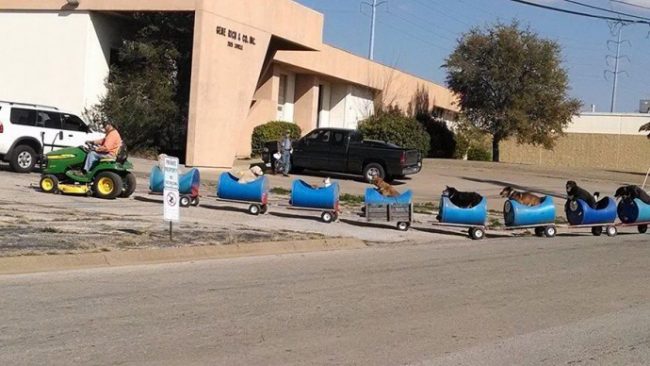 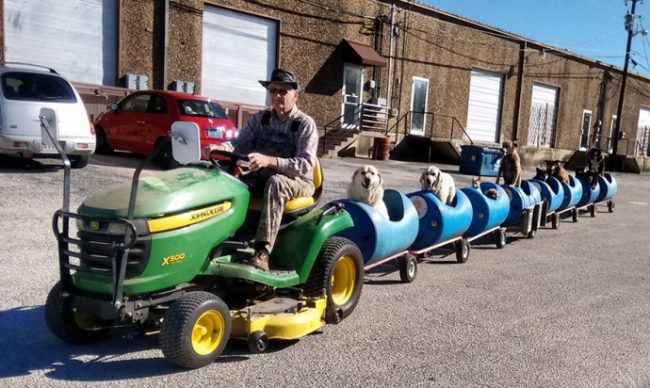 Say Goodbye To Cashiers: Walmart Store Switches To Self-Checkout Only

Which Egg Do You Think Came From An Actually Healthy Chicken?