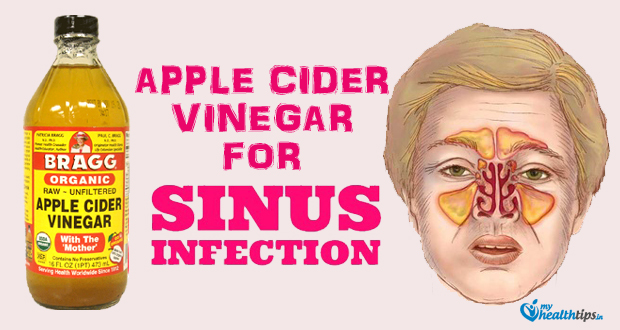 The inflammation of the lining of the sinuses is known as sinusitis. It is a common issue with numerous people, who constantly seek a solution and try various medications to relieve it, but apparently, most of them solve it only temporarily.

Therefore, we will offer you several fabulous homemade recipes with apple cider vinegar that will cure sinus inflammation and will prevent it from recurring.

Apple cider vinegar has potent antifungal and antibacterial properties, so it is extremely beneficial in the treatment of sinusitis. It is rich in calcium, magnesium, as well as vitamins A, E, B1, and B2, which help to relieve the infection. Moreover, it clears the sinus cavities, as it thins out the accumulated mucus and avoids any breathing difficulties.

The simplest way to use it is to mix it with some water. However, in order to boost its effect, you can also add some other beneficial ingredients.

These are the five most effective apple cider vinegar recipes in the treatment of sinusitis:

Mix two tablespoons of apple cider vinegar and a cup of warm water and prepare an efficient rinse. This rinse will effectively clear out the nasal passage since it gets rid of the accumulated mucus in the cavities.

Lemon juice is abundant in vitamin C, which effectively cures infections. Ginger is high in anti-inflammatory ingredients that have a significant effect on the sinus infection.

Cayenne pepper includes capsaicin, which is a potent compound that soothes the inflammation. Honey, on the other hand, is a powerful antibacterial agent that will help you get rid of bacteria which led to the infection and will prevent its reoccurrence.

In a pot, mix lemon juice and apple cider vinegar, and let the mixture simmer on low heat for a few minutes. Then, add the other ingredients. Pour the mixture into a glass jar.

Take 1-2 tablespoons of this remedy in order to remove the mucus from the nasal passages and promote an easier breathing.

Due to its powerful antibacterial and anti-inflammatory properties, honey will reduce the irritation and the throat inflammation.

Add the honey and apple cider vinegar in a glass of warm water. Drink this mixture in order to relieve sinusitis effectively, and prevent its reoccurrence.

In a saucepan, pour the water and mix it with apple cider vinegar. Heat them for a few minutes. Then, put a towel over the head and inhale the steam of the mixture. Repeat this procedure several times during the day in order to treat and successfully cure the sinus infection. Apple cider vinegar, due to its strong antifungal properties, will destroy bacteria and prevent the reoccurrence of the infection.