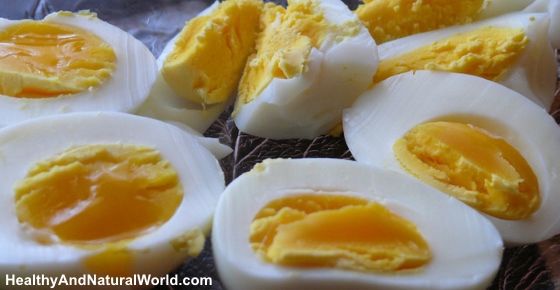 Eggs are one of the healthiest foods you can consume as they can provide numerous benefits for your health since they are high in important minerals and vitamins.

Here are some of the most important health benefits of eggs:

Eggs are rich in choline, as one large egg can provide 35 % of the daily choline needs. This important nutrient promotes brain health, as well as other nutrients which can delay Alzheimer’s disease and dementia.

According to a study published in the American Journal of Clinical Nutrition which was conducted on 1,391 volunteers aging from 36 to 83, the elevated levels of dietary choline is related to improved cognitive function, as well as verbal and visual memory.

Also, a British Journal of Nutrition study which included over 2,000 adults in their 70s showed that increased choline leads to improved performances on cognitive tests of cognition, sensory motor speed, perception speed, and executive function.

The Department of Nutrition at the University of North Carolina at Chapel Hill conducted a study which discovered that choline is also beneficial for the health of the heart, and may prevent breast cancer.

These findings were published in the November 2009 edition of the Nutrition Reviews journal and provided evidence for the positive effects of the consumption of eggs.

Even though some people are afraid of the high content of fat on eggs, eggs can actually aid in the weight loss process. Eggs are one of the best foods which help in burning belly fat, and they can help you lose 88 pounds annually.

The Journal of the American College of Nutrition published a study which showed that individuals who consume protein-rich eggs for breakfast could control their cravings for food more while trying to lose weight, as they provide satiety.  Also, this group ate fewer calories during the day.

Eggs are one of the rare natural sources of vitamin D, which in combination with calcium, strengthens the bones and prevents osteoporosis.

Eggs have proteins which are balanced and perfect for building strong muscles, and they renew the tissue of the muscles and boost muscle mass.

Great for Your Eye Health

Egg yolks contain mighty antioxidants, lutein and zeaxanthin, both of which protect vision and provide optimal eye health. They are associated with a decreased risk of macular degeneration and cataracts, known as the major contributors to blindness and vision impairment in elderly.

According to a study that was published in the American Journal of Clinical Nutrition, participants who ate 1.3 egg yolks every day for a month had their zeaxanthin and lutein blood levels increased by 114-142% and 28-50% respectively.

How To Quickly Wipe off The Dark Spots on Your Face