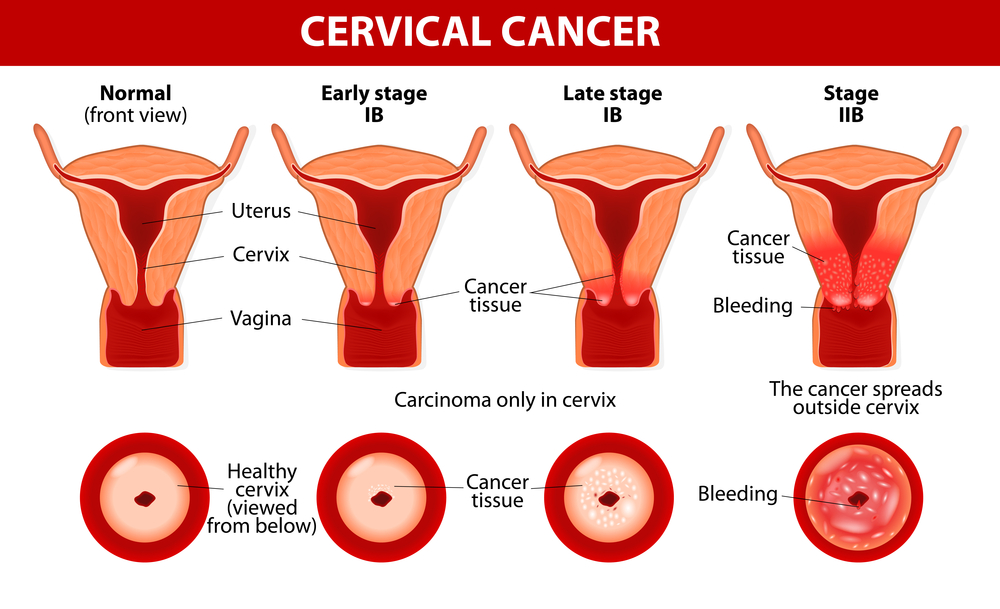 About 90% of patients diagnosed with cervical cancer have local symptoms. Systemic symptoms are not that common.

Local manifestation of the disease

Early stages of the disease can be asymptomatic, i.e. without any symptoms. The first symptoms that indicate a more or less advanced stage include:

In the early stages of cervical cancer, certain women undergo pain in the legs, as well as swelling. In the second case, the swelled cervix may result in an obstructed blood flow, which afterwards leads to swelling of the legs, and sore, painful sensation.

The presence of cervical cancer can be revealed by regular analysis of urination. In most cases, if urinary symptoms are involved, the cancer has spread to nearby tissue and requires immediate attention.

Discomfort while urinating is the most immediately obvious and prevalent symptom. Normally, these symptoms are connected to a tight and concentrating stinging feeling, but it can take on several different harsh sensations.

As tumor grows and spreads in the cervix, bleeding becomes heavier, irregular, accompanied by pain in pelvis, spine and legs. Sometimes the patient has swellings in the lower limbs because the metastatic lymph nodes compress blood vessels.

If the tumor develops in any surrounding tissues and organs, its symptoms correspond to the the affected organ.

For instance, when the tumor affects patient’s bladder, it causes: frequent urination, burning sensation, and blood in the urine (hematuria).

When it affects the rectum, it develops symptoms like tenesmus, painful bowel movement, blood in stool (melena). When it infiltrates or compresses the ureters (upper urinary tract), it causes hydronephrosis and renal failure or insufficiency.

In more advanced stages of the disease, it can lead to development of rectovaginal and vesicovaginal fistulas.

However, in advanced stages of the disease, the tumor may spread through the blood to other tissues and organs. It can affect any organ and tissue. However, cancer metastasis often affect cervix, lung, liver, bones and brain.

If there are metastases in the body, the clinical picture will show certain symptoms and signs of the affected organ or tissue. Therefore, in cases of bone metastases, the patient will experience severe pain in bones, and there is a possibly of pathological fractures of the affected bone.

If there are lung metastases, the patient will have breathing difficulties like cough, breathlessness, and haemoptysis. Pulmonary metastases are not that common.

If the tumor affects liver, the patient will feel tenderness below the right costal arch and hepatomegaly (enlarged palpable liver). Extensive metastases that cover a large part of the liver will cause disorders of numerous metabolic functions in the body, jaundice, weakness, malaise, and even coma.

Metastases in regional lymph nodes develop swellings in legs (in presence of metastatic packages on lymph nodes in the groin). Metastases in para-aortic lymph nodes cause pain, especially in the lumbar area and the back, and occurs as a result of the compression of any enlarged lymph nodes on the nerves.

In rare cases, cervical cancer may cause a paraneoplastic syndrome as a single manifestation of the disease. It can develop:

-- inappropriate values of ADH (antidiuretic hormone that increases reabsorption of water in distal tubule of kidneys).

Four Ways to Tone Your Arms With No Equipment Required