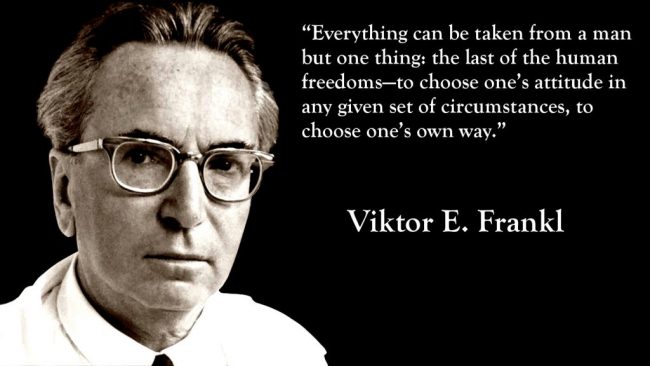 Viktor Frankl, an Austrian neurologist, and psychiatrist, and a Holocaust survivor is the founder of “logotherapy”, a form of existential analysis which is very influential in the discipline of psychotherapy.

In 1956, he published his book Man’s Search for Meaning, which was the beginning of his theory of logotherapy.

In the book, he chronicles his experiences in the Theresienstadt Nazi camp in the 1940s, which affected his understanding of reality. He describes the way he found meaning in all forms of existence, which gave him a reason to continue living.

His new school of existential therapy called logotherapy was based on the premise that man’s underlying motivator in life is a “will to meaning,” even in the most difficult of circumstances.

He is very concerned with satisfaction and fulfillment in life, but also emphasized the strong relationship between “meaninglessness” and criminal behaviors, addictions and depression.

These are his most powerful quotes on reality, life, love, and suffering:

Shape your own reality

-- Forces beyond your control can take away everything you possess except one thing, your freedom to choose how you will respond to the situation.

-- Our greatest freedom is the freedom to choose our attitude.

-- When we are no longer able to change a situation, we are challenged to change ourselves.

-- Everything can be taken from a man but one thing: the last of the human freedoms—to choose one’s attitude in any given set of circumstances, to choose one’s own way.

-- An abnormal reaction to an abnormal situation is normal behavior.

-- Our answer must consist, not in talk and meditation, but in right action and in right conduct. Life ultimately means taking the responsibility to find the right answer to its problems and to fulfill the tasks which it constantly sets for each individual.

-- The attempt to develop a sense of humor and to see things in a humorous light is some kind of a trick learned while mastering the art of living.

-- So live as if you were living already for the second time and as if you had acted the first time as wrongly as you are about to act now!

-- What is to give light must endure burning.

-- It did not really matter what we expected from life, but rather what life expected from us. We needed to stop asking about the meaning of life, and instead to think of ourselves as those who were being questioned by life—daily and hourly.

-- What man actually needs is not a tensionless state but rather the striving and struggling for some goal worthy of him. What he needs is not the discharge of tension at any cost, but the call of a potential meaning waiting to be fulfilled by him.

-- Ultimately, man should not ask what the meaning of his life is, but rather must recognize that it is he who is asked. In a word, each man is questioned by life; and he can only answer to life by answering for his own life; to life he can only respond by being responsible.

By his love he is enabled to see the essential traits and features in the beloved person; and even more, he sees that which is potential in him, which is not yet actualized but yet ought to be actualized.

-- Love goes very far beyond the physical person of the beloved. It finds its deepest meaning in his spiritual being, his inner self. Whether or not he is actually present, whether or not he is still alive at all, ceases somehow to be of importance.

-- A thought transfixed me: for the first time in my life I saw the truth as it is set into song by so many poets, proclaimed as the final wisdom by so many thinkers. The truth — that love is the ultimate and the highest goal to which man can aspire.

Then I grasped the meaning of the greatest secret that human poetry and human thought and belief have to impart: The salvation of man is through love and in love. … For the first time in my life I was able to understand the meaning of the words, “The angels are lost in perpetual contemplation of an infinite glory.

-- Ultimately, man should not ask what the meaning of his life is, but rather must recognize that it is he who is asked. In a word, each man is questioned by life; and he can only answer to life by answering for his own life; to life he can only respond by being responsible.

-- But there was no need to be ashamed of tears, for tears bore witness that a man had the greatest of courage, the courage to suffer.

-- The way in which a man accepts his fate and all the suffering it entails, the way in which he takes up his cross, gives him ample opportunity — even under the most difficult circumstances — to add a deeper meaning to his life.

It may remain brave, dignified and unselfish. Or in the bitter fight for self-preservation he may forget his human dignity and become no more than an animal.

Here lies the chance for a man either to make use of or to forgo the opportunities of attaining the moral values that a difficult situation may afford him. And this decides whether he is worthy of his sufferings or not.

-- Don’t aim at success. The more you aim at it and make it a target, the more you are going to miss it.

For success, like happiness, cannot be pursued; it must ensue, and it only does so as the unintended side effect of one’s personal dedication to a cause greater than oneself or as the by-product of one’s surrender to a person other than oneself.

Happiness must happen, and the same holds for success: you have to let it happen by not caring about it. I want you to listen to what your conscience commands you to do and go on to carry it out to the best of your knowledge.

Then you will live to see that in the long-run—in the long-run, I say!—success will follow you precisely because you had forgotten to think about it.

Woman Takes Plates of Food to Park, Left in Tears After Meeting Crying Mother: ‘I Know God is Real’

Man Built A Food Pantry On His Lawn So The Hungry Could Eat. Inspires Town To Do The Same.