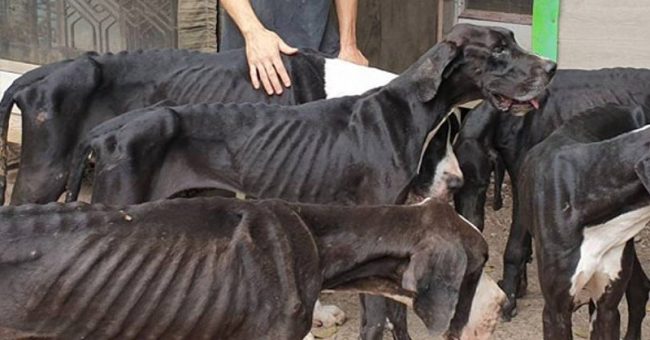 The animal welfare is a responsibility of the owner, but humans often forget this, and animal abuse stories reveal some horrifying details of torture and betrayal. Fortunately, many neglected animals manage to eventually find a loving home, such as the ones from our story.

On August 19, animal rescuers from Watchdog Thailand and the Pathum Thani Livestock Development Office’s Animal Welfare Division raided a dog breeding farm that had been reported to be abandoned by the owner a few weeks before and witnessed a horror.

Namely, thirteen Great Danes were locked in cages, starved, and emaciated, with their ribs and vertebrae protruding through their thinning fur.  Before the help arrived, three other dogs, a mother, and her two pups had died.

Department director-general Sorawit Thanito explained the department had rescued the dogs from a house in Lat Lum Kaeo district after receiving a tip-off via the department’s DLD 4.0 smartphone application.

The owner was a middle-aged woman who told veterinarian Kangwan Thirathamrong that she planned to raise the dogs and sell them.

Great Danes are huge, powerful and elegant dogs. Yet, they are considered gentle giants. These dogs are moderately playful, affectionate and good with children. They get along with other animals, particularly if raised with them and will surely guard one’s home. Also, Great Danes are considered easy to train.

Yet, the dogs’ owner was unemployed, and couldn’t sell them, so she shut down the breeding facility during her divorce and neglected the home and the farm. She claimed that she didn’t hurt the dogs and still fed them but they suffered due to her financial problems.

Her relative who lived nearby reported the case as she pitied the poor dogs. She told housekeeper Nui, 50, to look after the property after the woman’s abandonment, and Nui later helped with the rescue.

Some of the dogs were on the brink of deaths, and the cages were filthy, so volunteers helped them into their vehicles and sped them to the nearest vet, where they were examined, fed, and cared for.

The vet explained that all of the tortured dogs require further care for recovery in the animal center. Then, if the owner is not financially ready to take them back, they will look for any dog lovers who are willing to look after them.

Watchdog Thailand shared the photos of the thin animals on August 19, and Facebook users have shared them tens of thousands of times, and many donated to the cause.

And at this point, the miracle happened. On August 21, the King of Thailand Rama X. heard of the story and adopted the dogs and funded their full veterinary treatment, food, and any other needs.

All of the dogs, five males and eight females from the ages of five months to two years — were picked up by Animal husbandry officers from the Bureau of the Royal Household, and were brought to Kasetsart University’s animal hospital where they will continue to be treated and fed until they restore their proper weight.

Meanwhile, the police investigated this case, and as Department of Livestock Development Deputy Director-General Somchuan Rattanamangkhalanon reported, the dog breeder will face animal cruelty charges, under the Cruelty Prevention and Welfare of Animal Act.

Citizens have the obligation to report any abuse they see, and animal abuse includes numerous subcategories of animal abuse, such as hoarding, neglect, physical abuse, inadequate shelter in extreme weather, lack of veterinary care, organized cruelty, and abandonment.

If you notice these situations, do not ignore them, but report the case and save the animal’s life.

Dogs Can Sniff Out Cancer In Blood With Nearly 97% Accuracy, Study Shows