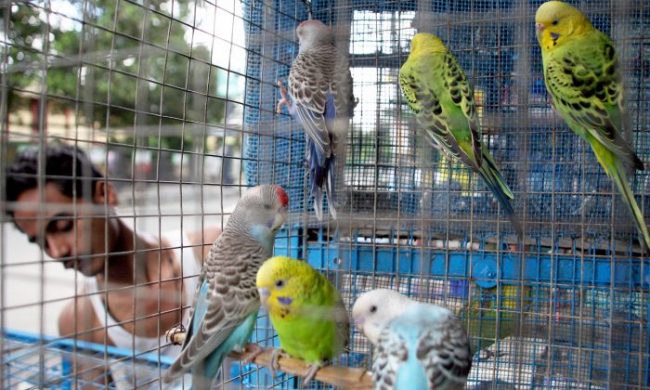 The illegal wildlife trade is a never-ending problem, and endangered species are still at risk. Millions of animals live in a world full of cruelty. In India, pet birds are traded uncontrollably and illegally and officials can’t find a solution to the problem. Luckily, this may change, and yes, we can say there’s still hope for these animals

On April 7, 2019, the Wildlife Crime Control Bureau (WCCB), under the Union ministry of environment, forest and climate change and the West Bengal forest department rescued hundreds of Indian birds from an illegal pet market on Galiff Street in Kolkata.

Authorities saved 550 protected Indian birds, including parakeet, hill myna, and Asian Koel. They even found some newborn chicks packed inside a tiny cage, and arrested nine individuals aged between 18 and 32.

This isn’t the first case on Galiff Street. A year ago, 65 parakeets and three hill mynas were rescued from an auto rickshaw.

Schedule I of the wildlife protection act protects the hill myna. Parakeets are protected under Schedule IV as confirmed by the range officer of Wildlife Crime Control Division of the forest department.

Sinha explained that individuals convicted of trading, killing or hunting animals protected by Schedule I may get seven years in prison. Unfortunately, this hasn’t stopped the illegal trade of animals.

In October 2018, authorities saved two lemurs, a baby marmoset and one Bengal cat at Kolkata Airport. The animals were brought in India from Bangkok via Myanmar. In 2015, India Today reported about an illegal bird trade in New Delhi.

Kartick Satyanarayan, co-founder and chairman of Wildlife SOS, explained that pet bird trade is the main issue at the moment. It’s sad how even protected species are trafficked uncontrollably.

Pet birds are smuggled in small boxes or cages without any food or water for ways. According to India Today, only 1 in 10 birds survive the process.

Satyanarayan explains that not every bird is protected by the Wildlife Protection Act, because some of the smuggled birds are legitimized by saying that they were captive bred in India. This process makes them aviary bred or exotic birds.

Eco Healthy Pets has a database of the best pet choices for the environment, people and animals. Pets are ranked according to their sustainability, invasive threat, ease of care and health risks. You can also adopt a pet from an animal shelter.

Hopefully, these changes will save millions of birds in India. Let’s stop the illegal trade. You have the power to do that. Being informed is the first move you can make.

Pineberry: The Strawberry That Tastes Like Pineapple (Easy to Grow It)

Study Shows Fasting For One Day Can Regenerate Your Stem Cells