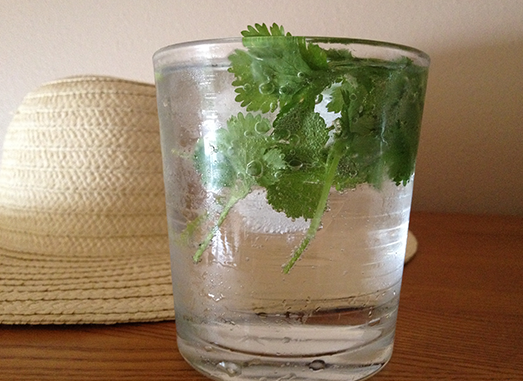 The tap water we use daily contains much more than you know.

The Associated Press reported that a study conducted on 24 municipal tap waters which showed that our drinking water supplies contain small amounts of pharmaceuticals — such as hormones, antibiotics, mood stabilizers, and other drugs.

Heavy metals accumulate in the body, leading to numerous health issues and affects all organs in the body.

Yet, the beneficial properties of cilantro efficiently purify water, while absorbing heavy metals and toxins. It contains chemical agents which bind with these metals, and wrest them free from the tissues and remove them from the system.

Yet, its power lies in the structure of the outer walls of microscopic cells, as it enables the absorption of heavy metals.

A research team led by Douglas Schauer from Ivy Tech Community College in Lafayette, Indiana, together with a team of Mexican researchers, showed that the leaves of cilantro are the cheapest way to filter water, and can be used in poor regions to purify the unclean water.

They tested various plant samples and found that this plant is the most effective and potent bio- absorbent material in the Tule Valley in Mexico City, which is an area with seriously contaminated water with nickel and lead.

The cilantro bio-absorbent can be used instead of the typical charcoal, which is more expensive, in order to capture metal toxicity.

“The organic toxins we can take care of pretty easily with a number of different methods, but the only way to really get rid of those heavy metals is to treat them with filtering agents like activated charcoal, but those types of materials are kind of expensive. They are a little expensive for us to use, but they are very expensive for the people living in that region.”

In order to use the purifying properties of cilantro, just add a handful of it in a pitcher or 2l of extremely contaminated water.

Here Is How To Look Years Younger By Using Coconut Oil For 2 Weeks This Way!

What Will Happen If You Drink Apple Cider Vinegar Mixed With Honey Every Morning?