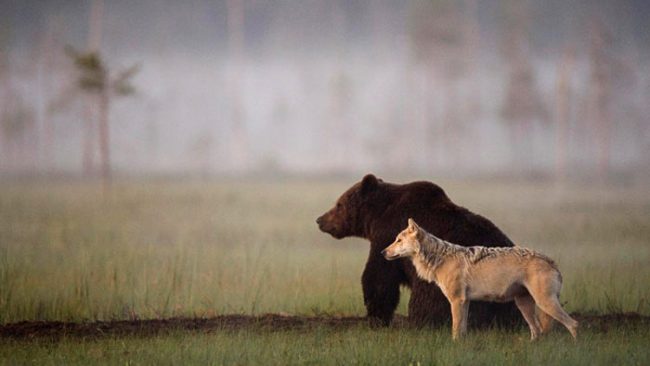 Over the course of ten days in 2013, Finnish photographer Lassi Rautiainen captured the unique “friendship” of a female grey wolf and male brown bear.

The duo went everywhere together, played together, hunted as a team and shared their food. From between 8 pm and 4 am, they would stay in each other’s company for hours.

In an interview with Daily Mail in 2013,  Rautiainen explained that he believes that was actually the first time, at least in Europe, where such a friendship was developed.

“It’s very unusual to see a bear and a wolf getting on like this. No-one can know exactly why or how the young wolf and bear became friends. I think that perhaps they were both alone and they were young and a bit unsure of how to survive alone…It is nice to share rare events in the wild that you would never expect to see.”

These cases are extremely rare, especially in the wild, but there are no scientific studies on the matter.

“It seems to me that they feel safe being together.”

At times, even in nature, strict rules don’t apply. This is not the first time animals pair in an unexpected manner. Other reported cases of unusual wild friendships include a lioness in Kenya who stayed with and protected her young oryx prey, instead of killing and eating it and a leopard in India that returned night after night to cuddle up with a chained-up cow.

It is unclear why such unusual pairings occur, but wild animals that have been separated from their mothers too early, or that are cast out from the group, can sometimes take odd steps as they figure out how to survive on their own.

They realize that a partner of any species can bring comfort, and a sense of safety, especially if there is enough food to go around.

Each evening, after a hard-day’s hunting, the two could be seen sharing a convivial deer carcass meal together. 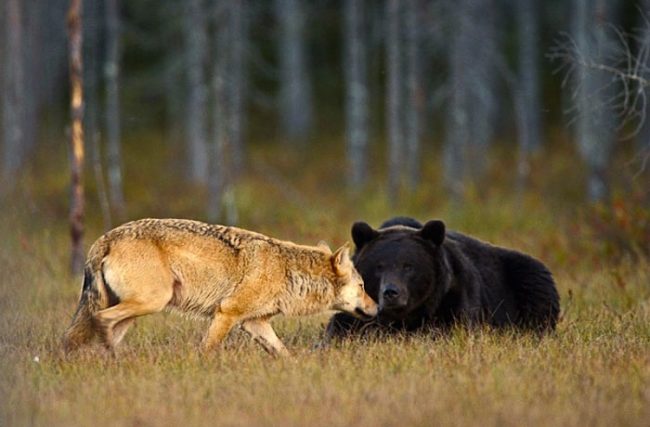 They hung out together for at least 10 days- The two have probably found the softer side in one another. Otherwise, bears and wolves are isolated hunters. 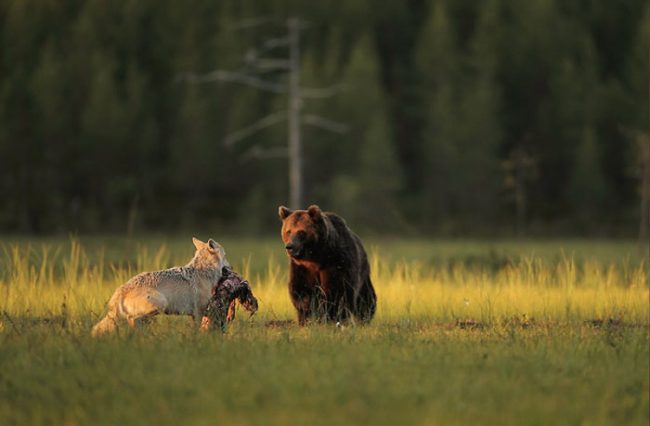 The pair were seen playing 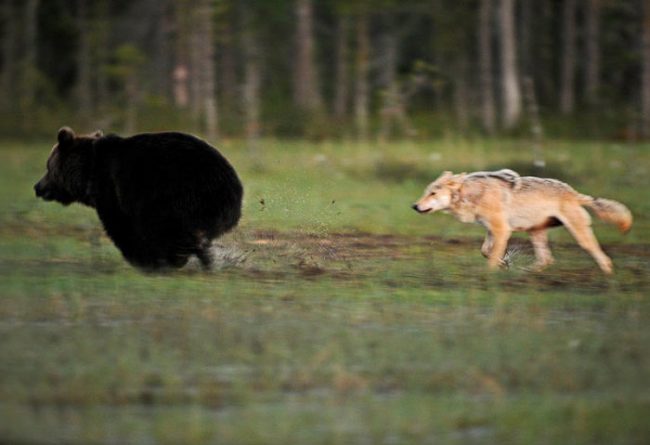 The unlikely friends met every evening for supper 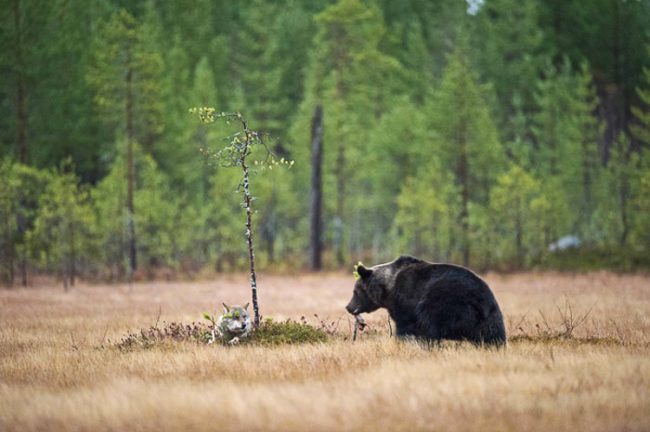 The heart-warming pictures were captured by nature photographer Lassi Rautiainen, in the wilds of northern Finland 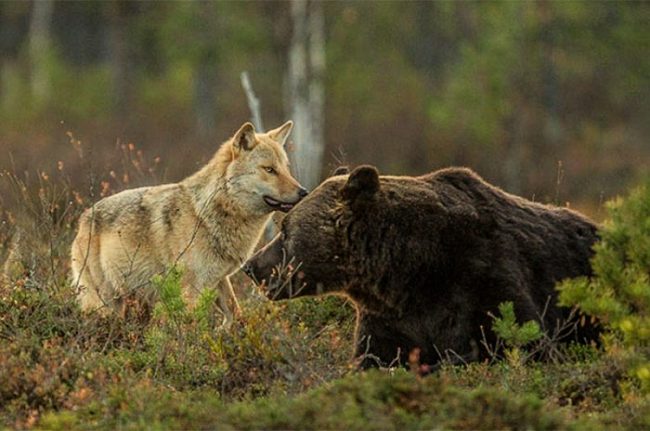 Some pictures show the duo sitting down to eat together and sometimes, they even enjoyed the view over the landscape for up to a few hours 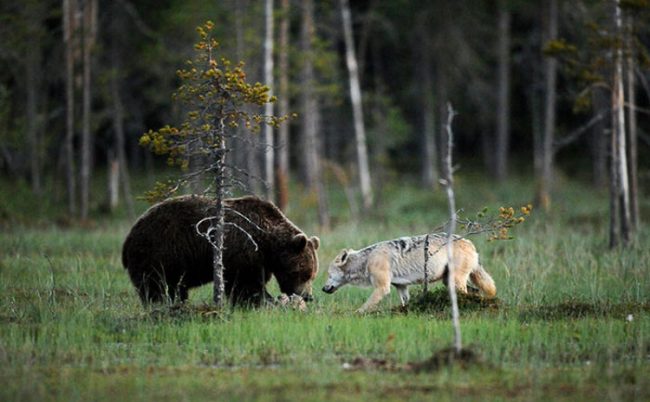 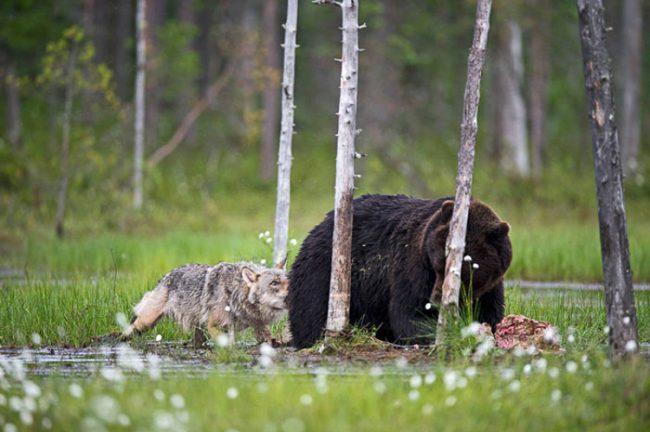 Their relationship baffled scientists, but they seemed happy in each other’s company 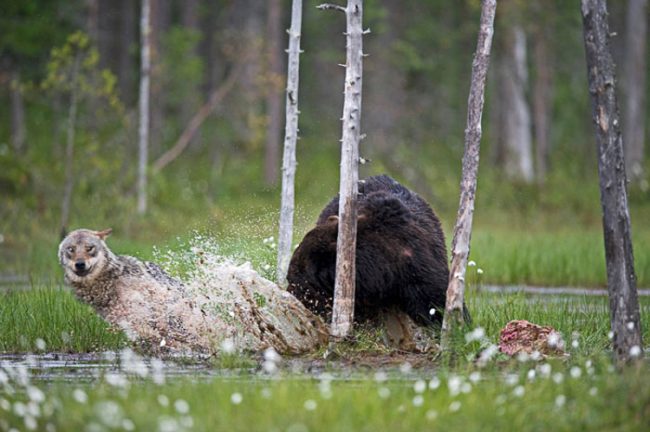 Lassi said:’No one can know exactly why or how the young wolf and bear became friends. I think that perhaps they were both alone and they were young and a bit unsure of how to survive alone. 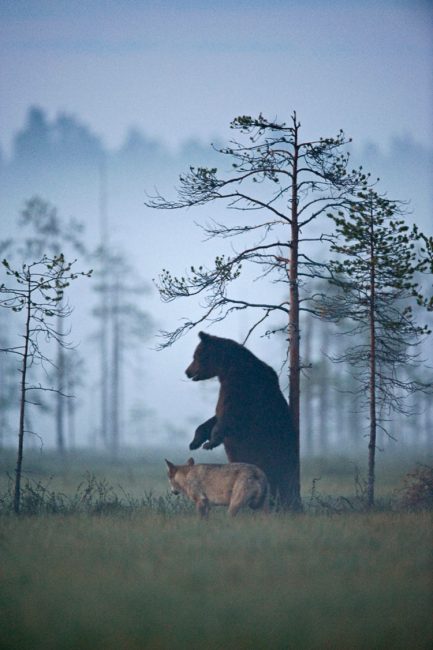 The best friends met every night for ten days straight 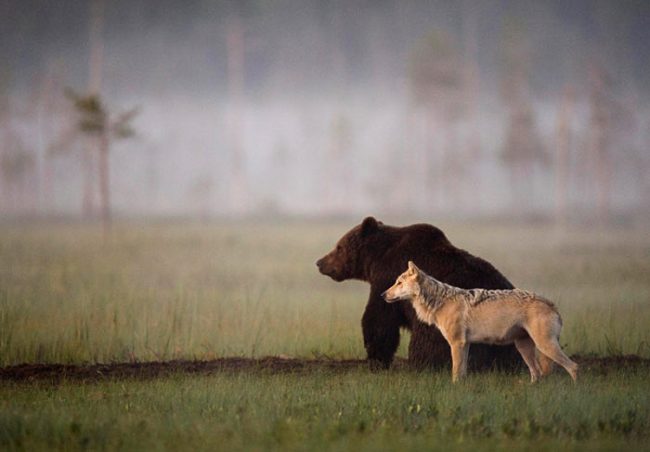 Unusual wild animal friendship -- Bear and Wolf in Finland – To survive in the environment full of potential threats, wild animals obey strict rules of the animal kingdom. It is common to see the same species looking after each other’s back in the wild, but this is not the case with friendly interspecies relationship like this one.

Beautiful Pictures Of Baby Caracals, One Of The Most Gorgeous Cat Species Ever