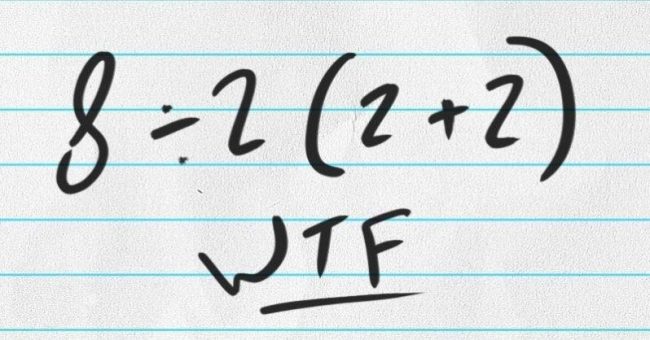 Following the social distancing guidelines due to the COVID-19 pandemic, many people are isolated in their homes and ended up searching for various ways to combat the boredom.

While some started learning a new language, exercising, reading more, others started browsing the Internet for interesting ways to engage their minds.

One particular internet feud might spark interest in you too, even though it seems like a simple math equation at first glance. Unlike other feuds, math is supposed to be objective, but this is not the case with this one.

Give it a try:

Twitter users started arguing about the answer, with many trying to ‘school’ others ‘. The arithmetic problem quickly went viral, with users citing fundamental principals in math, some insulting the others, and math majors arguing over it.

Many used their scientific calculators to prove their answer is right, others used their degrees to indicate they cannot be wrong. Some gave up quickly after they realized it is not a simple math problem, others took it really seriously.

There were even those that claimed that both answers are correct!

As the discussion was not even close to an end, experts stepped in to help. Apparently, the answer depends on where one has studied math.

According to the PEMDAS method, the operations are ordered like this: Parentheses, Exponents, Multiplication, Division, Addition, and Subtraction.

“According to the order of operations, you solve whatever is in the parentheses first. That gives you 4. Then, in PEMDAS, multiplication, and division take equal precedence, so you’d do the first that occurs from left to right.

Breen adds that no one is wrong, as it has been ambiguously written in the first place. The creator has written it with an incorrect notation specifically to spark outrage and a battle of “who’s smarter.”

For me, I would write this more explicitly so that there is no confusion. Like this: 8/(2*(2+2)), if that’s what you are trying to do. That way no one will get it wrong.”

Dr. Thomas House, a lecturer in Applied Mathematics at the University of Manchester, agrees:

“The lesson is that we have to be careful about definitions. When writing computer code the first interpretation would normally be written (8/2)*(2+2) and the second 8/(2*(2+2)) to avoid any ambiguity.”

Viral debates of this kind emphasize the fact that each person sees the world differently. Reality depends on our own views and experiences. This phenomenon is known as confirmation bias, as we close the mind for ideas that contradict our own beliefs.

Yet, this teaches us a valuable lesson- if we are open to other people’s beliefs, we can end up learning something we never knew.

Remind Yourself To Be Grateful Today

Become The Best Version Of Yourself With Kindness!