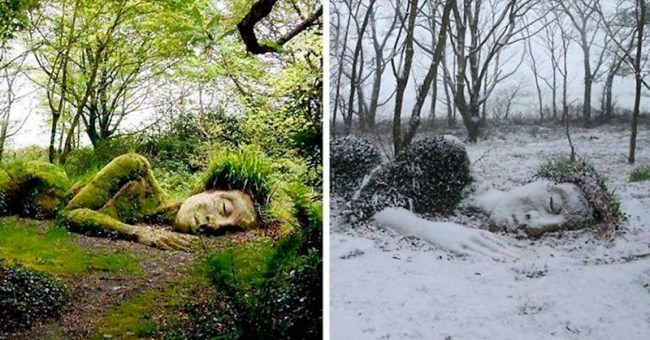 Sculptures are fascinating works of art, and art lovers often revisit the ones that have impressed them, to marvel at their beauty once more. Yet, what if a sculpture changed every time you went to see it?

Well, the sculpture of a giant woman sleeping in the grass in a garden in the Southwest of England changes its appearance with the season! The Mud Maid is an incredible living sculpture you can see if you ever visit the lands of Cornwall.

It lies in the Lost Gardens of Heligan, which belonged to the Tremayne Estate starting in the late 16th century.

By the 19th century, the gardens became a stunning place to visit, and their massive size demanded the work of 22 gardeners by the beginning of the 20th century.

Unfortunately, the first World War made the gardens fell into disrepair.

In the 1990s, the place was rediscovered by a distant relative of the Tremayne family, who started a campaign to restore the former glory of the gardens. This eventually became Europe’s largest garden restoration project.

According to the website, “today, The Lost Gardens have been put back where they belong: in pride of place among the finest gardens in England.”

Architect Tim Smit led the project, and apart from restoring the gardens, some floral art installations were commissioned too, including the Giant’s Head and the Mud Maid.

Now, they are popular tourist attractions, and the surrounding communities have benefited a lot from the increased tourism.

Apart from vegetable gardens that grow produce for sale, the gardens still have the former attractions, like massive rhododendrons, the Italian gardens, and the jungle gardens.

Since 1997, when it was commissioned, The Mud Maid  has become an integral part of the gardens. It was created by brother-sister duo Pete and Sue Hill, and it is a “living sculpture”, as her clothes and hair are made of grass, ivy, and moss, so they change throughout the seasons. 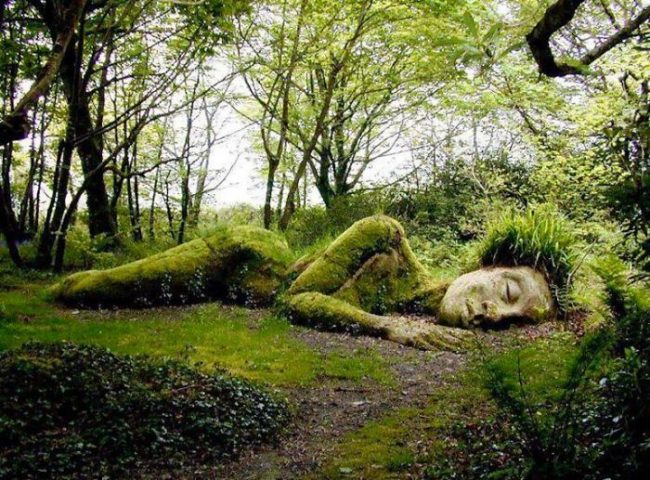 So, you’ll see her looking completely different if you visit her in spring and summer, and go again in autumn and winter!

The Mud Maid had originally been planned as a sort of mermaid, but when a member of the restoration team called her a Mud Maid, the tail was scrapped. 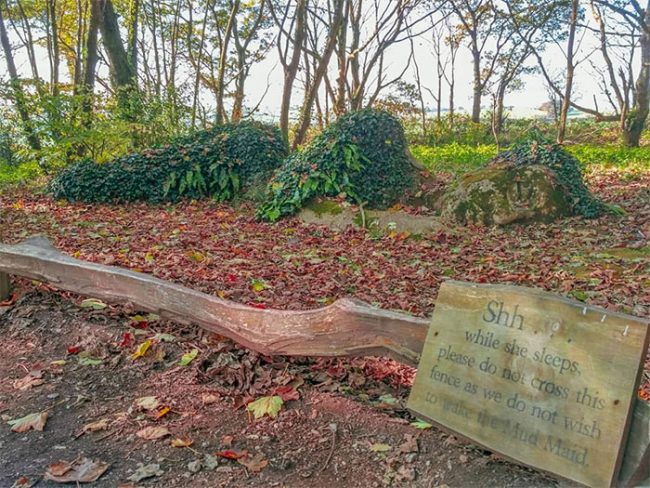 It was built using a framework of hollow timber from leftover wood on the property and windbreak netting, which was then covered in sticky mud. The sculptors made the face from a mixture of mud, cement, and sand, while her head is full of Woodsedge and Montbretia. The body is covered in ivy.

To encourage the growth of linens over the body, they initially covered the sculpture in yogurt!

The aim of both sculptures, the Mud Maid and the Giant’s Head, was to add a sense of mystery to the gardens.

In the spring, the sleeping woman is covered in green mosses, ivy, and grasses. It gets darker as the weather becomes colder. It is lightly dusted in snow in the winter. 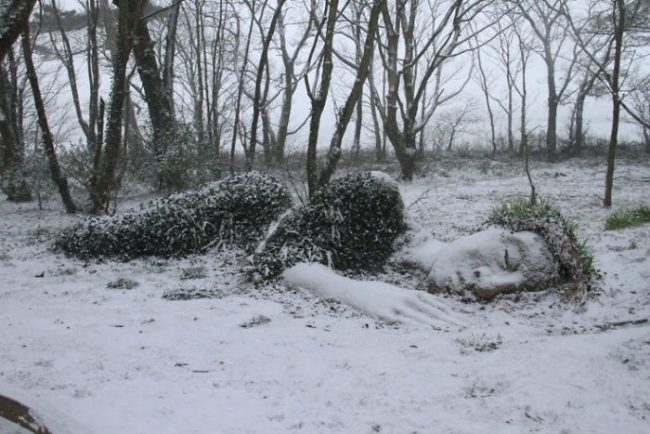 Wouldn’t it be wonderful to see it?

If you plan to visit the gardens, make sure you set aside a lot of time as they span two hundred acres!

The gardens are open every day of the year except Christmas.

Stroll through the Woodland Walk to see the Mud Maid, the Giant’s Head, and the Grey Lady. There are numerous trails, an adventure playground for kids, and numerous scenic picnic spots.

If you want to explore the place more, you can purchase a hot or cold meal or sandwich from the Heligan Kitchen or Steward’s House for as little as two to five euros.

You will also be excited to see the Burmese rope bridge!

There is a great gift shop as well, where you can find numerous souvenirs to remind you of your visit. The entrance is free for children under 5 years old, and there are discounts for students and seniors as well.

Ready to see this paradise on earth?

And be quiet while there, as you don’t “wish to wake the Mud Maid”!