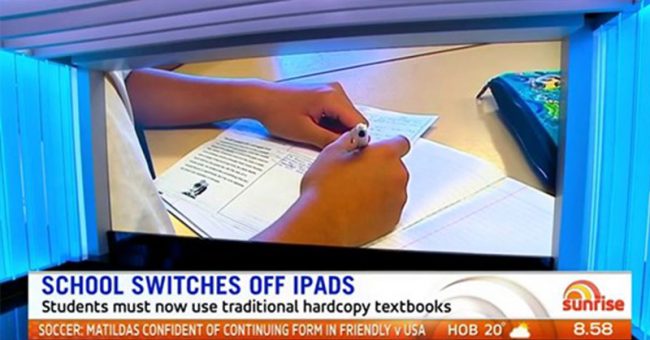 Nowadays, technology has become one of the crucial aspects of living, and youngsters are becoming growingly dependent on their high-tech devices. This made numerous schools incorporate them in the classroom, and numerous parents believe they are essential for modern education.

However, numerous scientists and doctors warn about their excessive use and the effects of the digital era.

As a result, Reddam House Private School, located in Sydney’s eastern suburbs, has officially banned the use of iPads and gone back to regular textbooks. The school claims that it was done due to the feedback they received from students, who prefer pages to screens.

The school has used these devices for the past five years, but found that they do not improve the technology skills of the students but hindered their learning instead.

According to principal Dave Pitcairn, students were distracted by messages and other alerts and maintained that they learned better when searching through a textbook, as they found it easier to research and take notes.

He maintains that students learn better the more faculties they use, the more senses they use in research and reading and making notes.

IPads were only introduced in 2010 and adopted into classrooms in the subsequent years, and the conflicting research between iPads and textbooks reveals that there are pros and cons to everything.

Canadian research that involved 6,000 students who use iPads every day for learning, highlighted both the pros and cons of this practice.

The study showed that students had easier access to information and were more motivated, but on the other hand, they developed poor writing skills and were distracted during classes.

A global report by the Organisation for Economic Co-operation and Development (OECD) reveals that education systems that have invested heavily in computers have seen no noticeable improvement in the reading, maths and science skills in the Programme for International Student Assessment (Pisa) tests.

The OECD’s education director, Andreas Schleicher adds that if we look at the best-performing education systems, like those in East Asia, we can conclude that they have been very cautious about using technology in their classroom. Moreover, students who use tablets and computers very often tend to do worse than those who use them moderately.

While many studies have shown that iPads in the classroom can increase the engagement of students, the educational benefits of such device use for learning haven’t been formally evaluated.

Many claim that teachers lack the skills to truly leverage the potential of using these devices to boost learning and technology skills among students.

On the other hand, the use of technology requires upgrades, which is certainly a concern considering the low education budgets.

Also, there is a need for control of the use of the devices, especially when it comes to internet access.

Students were also shown to engage better with a physical textbook and to comprehend better when learning from actual printed textbooks.

We should not forget the effects of the blue light emitted by these devices, which might lead to permanent eye damage, and their use has been linked to mental health issues and delayed language development, obesity, sleeping and attention problems, and more.

Some even note that the use of digital devices could cause addiction, depression, chronic stress, and irritability.

Apparently, the decision made by Reddam House Private School in switching back to print is right.

If we intend to use these devices to their full advantage, teachers should be better trained, and we need more data suggesting they are beneficial for students.

Anxiety Disorders May Be Caused By Exposure To Narcissistic Abuse