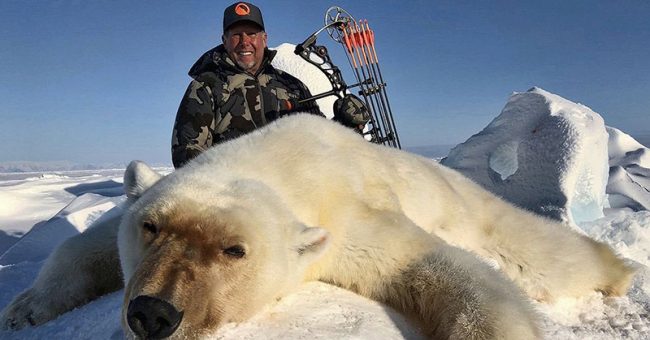 Polar bears are magnificent animals, with their snow-white fur and giant size!

Unfortunately, their population is dramatically reduced. They are classified as “vulnerable” on the IUCN red list, they are considered threatened in the US, and in Canada, they are of “special concern“.

Yet, people can be selfish and greedy, and would often do anything for financial profit, something they have proven countless times before.

Therefore, apart from climate change that keeps melting the ice they hunt on, the extinction of polar bears is also aggravated by trophy hunters and a rising demand for their skins in China, which can fetch up to £250,000.

When the United States announced that it will not pursue an international ban on the commercial trade of polar bear hides, the reactions were mixed.

Some Native Inuit organizations were pleased that they will protect their sovereign indigenous rights to hunt polar bears for their meat and pelts, but many were worried about the toll of trophy hunting.

Polar bears have become the main symbol for global warming, and big conservation campaigns are published with images of polar bears. Human removals (killing) of polar bears are rarely mentioned in these campaigns at all.

A big problem when working with polar bear conservation is the fact that information about polar bear hunting is hidden, very limited, only available for shorter periods or only referred to as ‘sustainable’ without any concerns.”

Liodden has spent four years working on a project to highlight their plight, and he emphasized the need to put a stop “to trophy hunting and the commercial skin trade”, as “it is the only way polar bears have a chance of survival in a future with global warming.”

Therefore, an international agreement has banned ship-based and aerial hunting of the bears since the 1970s.

“The polar bear is one of the most exclusive species for trophy hunters to pursue. But it is the mammal species least suitable because of low cub survival, low reproduction rate, and climate change.

Although a warmer climate may largely determine the future distribution of polar bears, the vast majority of population reductions over the past 30 years are attributable to unsustainable hunting.”

The rate at which polar bears were killed skyrocketed in the 1940s, with the beginning of trophy hunting in Alaska, USA, and Svalbard, Norway.

Nowadays, hunting polar bears is not banned in Canada only. Some Inuit tribal leaders agree with like Liodden and oppose their hunting, but the Canadian government supports the legal practice of hunting polar bears and even encourages them to act as guides for trophy hunters.

Daily Mirror reported that an investigation has “uncovered a host of firms offering hunts in the Arctic Circle marketed as “the most memorable” trophy collectors would ever find.”

With the current rate of global warming, experts fear that polar bear populations could be cut in half by the middle of the century.

Therefore, the ban on trophy hunting of polar bears needs to be issued soon.

Eduardo Goncalves, the founder of the Campaign to Ban Trophy Hunting explains that “trophy hunters kill the biggest animals, removing the genes needed to help it survive global warming.”

According to the website of Polar Bears International, the previous population management strategies have been sufficient for guaranteeing the continued survival of polar bears, but they are now threatened by climate change.

They add that” polar bears depend on the sea-ice surface to catch their seal prey, and global warming means progressively less sea ice on which they can hunt.”, and they will “ see their habitats literally melting under their feet unless we act to curb greenhouse gas emissions. “

However, “maintaining these harvests in the longer term depends on reducing the rise in greenhouse gas concentrations, but for now, some populations may still be safely hunted.”

Experts are not optimistic, though, and Péter Molnár, a researcher at the University of Toronto Scarborough, says that “it doesn’t look like they’re going to be around for very much longer in most populations” adding that they “very strong evidence that these declines will just get worse as the climate changes. “

Incredible Photographs Of The World’s Most Beautiful Types Of Pigeons