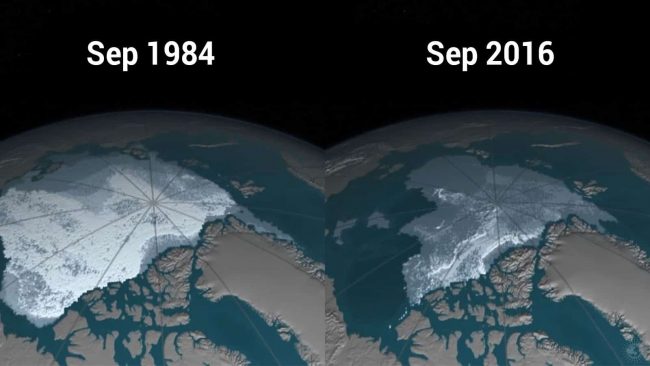 NASA follows the changes in polar ice caps in the Arctic Sea, and released a video to confirm the ice loss. The changes were observed from 1984 to 2016. According to this video, the first ice loss happened in 1989, and there was another one in mid-2000s.

The polar ice caps in the arctic are important

Old ice prevents new ice from melting quickly. Simple as that. What happens when you put ice in a glass of water that already has one ice cube in it? The new ice will melt. This won’t happen if you first fill the glass with ice cubes.

New ice has to build upon itself and mature over time

New and old ice covers change throughout the year. Ice melts in summer and freezes in cold winter months. The old ice melts at a rapid pace, and it’s almost impossible for new ice to hold on. Water temperatures go up, which speeds up the melting process.

Ice reflects rays from the sun away from Earth. If the ice cover is small, the sun will hit Earth, further increasing temperatures.

Global warming includes the temperature of Earth. It doesn’t apply to the average temperatures you see based on climate or daily temperatures.

According to a recent article published in the Washington Post, temperatures in the Arctic near Greenland go as high as 40 degrees. Marco Tedesco is an ice researcher at Columbia University. He explained that Eastern and Central Greenland have marked an increase of temperatures, too.

The warming affects 45% of the ice. Experts note that this is the highest warming since 2012. Greenland had its highest ice melt in 2012. About 97% of the ice cover melted within a few days. Things will get even worse in 2019.

Scientists will arrive in the Arctic in September. It’s the warmest month of the year. The Multidisciplinary Drifting Observatory for the Study of Arctic Climate will organize an expedition that will start off in September 20th. Alfred Wegener Institute, a polar research center from Germany will take the lead and sponsor the ship, RV Polarstern. A great part of nations are expected to take part in the expedition as this is referred to as the last opportunity to change something.

Russia, China and Sweden will provide resupply vessels. Japan will be in charge of the carbon measures. The Swiss are providing snow sampling equipment. The National Science Foundation and other US agencies will provide over $25 million in grants, gear and logistics.

The research ship will observe the snow caps, and will reach Greenland at the end of the year. Experts will observe the ice, the melting and the environmental changes. The water in the Arctic will be checked, too.

This will be the very first ship to flow near the Arctic for a year. It may also be the last. Older researchers believe the ice will last another three decades.

Global warming and climate changes should be a top priority at the moment. Things have changed drastically, and our planet is in danger. Scientists will evaluate the current situation, and hopefully design a solution.