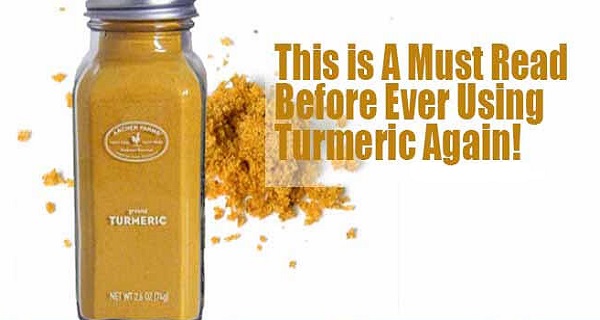 Turmeric is becoming increasingly popular, and this natural superfood deserves it!

Its active ingredient, curcumin, which gives its yellow color, Is actually responsible for most of its medicinal properties.

As proven by the study abstracts from the National Library of Medicine’s bibliographic database MEDLINE, turmeric and its primary polyphenol curcumin have over 600 potential health benefits.

Therefore, if you add it to your regular diet, you will experience major health improvements! However, before you do so, you need to know several things about this spice:

Since curcumin is the active compound which provides the favorable properties of turmeric, you need to know that it is not easily absorbed.

Moreover, the findings of animal and clinical studies indicate that the curcumin concentrations in blood plasma, urine, and peripheral tissues are extremely low regardless of the size of the dosage.

Yet, there are natural ways to boost the bioavailability of turmeric.

Black pepper is a potent natural medicine as well, and when combined with turmeric, it acts as an adjuvant. According to NutritionFacts:

“If people are given a bunch of turmeric curcumin, within an hour there’s a little bump in the level in their blood stream. We don’t see a large increase because our liver is actively trying to get rid of it. But what if the process is suppressed by taking just a quarter teaspoon’s worth of black pepper?

Then you see curcumin levels skyrocket. The same amount of curcumin consumed, but the bioavailability shoots up 2000%. Even just a little pinch of pepper—1/20th of a teaspoon—can significantly boost levels. And guess what a common ingredient in curry powder is besides turmeric? Black pepper.”

Furthermore, the findings of the study under the title “ Influence of piperine on the pharmacokinetics of curcumin in animals and human volunteers” indicate that when piperine was administered alone with turmeric, it boosted the bioavailability of curcumin by 2000%.

Turmeric is fat-soluble, so you need it to mix it with a healthy fat in order to boost its absorption rate. When combined with healthy fats, like ghee, coconut, or olive oil, curcumin is directly absorbed into the bloodstream through the lymphatic system while partially bypassing the liver.

“ This is very important because less curcumin is exposed to metabolic enzymes and remains in a free form allowing it to stay in the body longer. “

“The better way to take it, I feel, is to use it in your cooking very extensively. If you have any sauté, just sprinkle it in. The moment you heat oil and add turmeric to it, it now becomes completely bioavailable to you.”

“The potent ingredient in turmeric is curcumin, which, despite its power, is not easily absorbed by the body without assistance. This is where the sauté pan and a little warm oil come into play. I use it [turmeric] in every sauté, just a quarter teaspoon, a half teaspoon is enough. But you don’t have to use it sparingly – use it lavishly.”

To sum it up, to boost the effectiveness of turmeric and enjoy all its health benefits, you need to remember:

Also, before you start using it, you should know that the dosage guidelines according to the University of Maryland Medical Center are as follows:

10 Signs You Have Been Exposed To Toxic Mold!