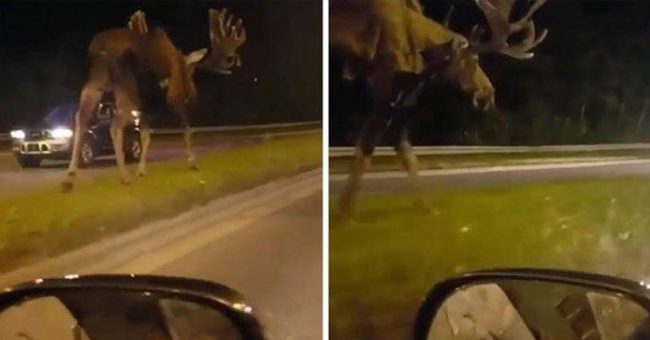 Moose are bigger than you think and their strange features have impressed researchers.

Have you ever seen a moose? No? Well, these giants sure know how to make a good first impression. A viral video features a gigantic moose walking down a road in Alaska. Millions of people have watched it!

A man in Alaska shared the video, and people went crazy. Some people noticed that the animal was probably injured as it limped down the road. However, most of his followers were shocked by its size. That moose is huge!

Moose are ungulates and belong to the deer family. They have a long nose, humped back, thin legs, and massive bodies. People sometimes confuse them with elk or reindeer. Moose is the largest member of the deer family. According to experts, they are the tallest mammals in North America.

Moose grow up to 5-7 feet, and their size depends on their gender.

Physique of the Moose

Moose have large bodies and short tails. Their fur is brown or black, and they have a hump on the shoulders. These giants have stereophonic hearing due to their rotatable ears.

Male moose have massive antlers that reach a diameter of 1.8 meters. These are a murder weapon as moose use them to fight with other moose for a lady. They mate in September and October and then shed their antlers until next year.

Moose prefer cold weather and thrive in Alaska and Northern Canada. The giants are also native to Northern Europe, some northern states, the Baltic regions, and Siberia and some cold areas of Asia.

Big moose don’t sweat and can’t live in areas where temperatures go above 27. They pick their natural habitat between the 50th and 67th parallel.

Habits of the Moose

Moose don’t like other animals. Or people. They are one of the least social animals in the world as confirmed by the Animal Diversity Web. A moose has company only during the mating season. They go back to their solitude after the short romance.

A male moose sometimes creates a “harem herd.” They hang out with several female moose and fight every moose that approaches their herd.

Moose are most active at sunrise and sunset. The rest of the day they relax and digest their food. Moose may be big, but they still have some predators, including bears, wolves, and cougars. That’s why they are always alert to the threat of a potential predator.

Female moose give birth after 7.5 to 8 months after conceiving. Baby moose weighs about 35.7 pounds and gains 2.2 pounds per day in the first six months. The cuties are able to stand without assistance by the end of Day 1.

Calves reach full growth in 4-6 years. Sadly, half of the calves are killed by predators by the time they reach six weeks. Adults have a 95% survival date and live up to 15-20 years.

The Diet of the Moose

A big moose has a four-chambered stomach, just like cows. They can swallow, regurgitate, chew again and re-swallow their food. Food is fermented in the first stomach and the vital nutrient extraction takes place in the moose’s other stomachs.

There are 1.5 million of moose worldwide. The biggest treat comes from drivers. Most moose-vehicle collisions take place in Alaska.

Meet The Iceman – 5,300-Year-Old And Best Preserved Human Being Ever Found

Honey 'May Be Better Than Antibiotics' For Curing Coughs And Colds, Study Claims