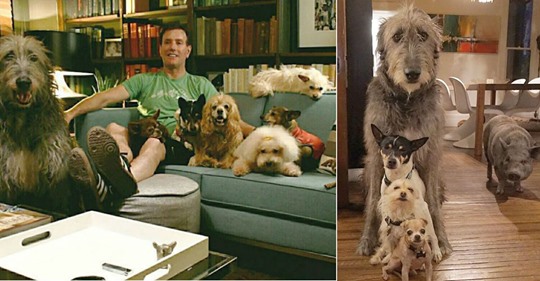 A dog in the house is a constant source of joy and unconditional love. However, it is inevitable to say goodbye to your furry best friend at some point, and this is one of the saddest things in life.

Grieving the loss of a beloved pet is very difficult, and the silence our pets leave behind them is deafening.

However, grief leads to numerous changes and transformations as well, and this happened to a man who has lost his special little buddy. After the death of his dog, he decided to adopt the “least adoptable” of the bunch at one local shelter.

And this was just the start.

Steve Grieg loves dogs, and he was always surrounded by 3-4 of them. He lives on a large piece of property with plenty of space for all these furry creatures.

However, when Wolfgang passed, he knew it was an end of an era. The void he felt after the death of his dog had to be filled with love.

He soon took 12-year-old Eeyore, a Chihuahua with bad knees and a heart murmur, at home.

However, things have changed a lot since then, and Mr. Greig now shares his home with nearly two dozen animals of all varieties. He has eight senior dogs, plus two other dogs, (one dog is a roommate’s and the other belongs to Greig’s sister) two Calico kitties, a few ducks, a miniature pot-bellied pig called Bikini, a bunny rabbit, some chickens, two pigeons, and a pond full of koi.

This is the first picture @melissamarkle and I took for the book and it holds a special place in my heart. (She actually took the picture, I just arranged the participants.) And at long last, The One and Only Wolfgang has been released. It will be at Barnes and Noble (link on bio), certain independent book stores across the country and Amazon. Target will start carrying it mid-October. I love taking care of these guys and showing the world how much love they have to give, and I love the message this book sends to kids. “Because old is as cool as new…..” #theoneandonlywolfgang coauthored by NYT best seller @maryrandhess illustrations by @nadjasarell

He realized that he needs to create new bonds and make others feel happy and loved as well. As Mr. Greig explained: “Knowing that you saved an animal from possible death has an incredible impact on both of you.”

Greig wakes up at 5.a.m in the morning every day, to make breakfast for his big family of ten cute dogs. Then, his day is filled with walks in the park, vet and grooming appointments, and lots of cuddles.

Moreover, he maintains that he loves adopting senior dogs, as they are all incredibly low-energy and well-behaved.

It’s been about a week without Edna and it’s been rough, but these guys are the best thing for healing. Loving someone that needs you…that needs you to love them, is the best thing ever. #wemissyouedna (Doris isn’t in the picture because, ironically, Bikini still hates her. I guess sometimes love takes time…)

He says they are wiser, and they know who they are. He adds:

“It’s easy to develop a relationship with a person or pet who knows who they are.”

Steve eventually decided to start an Instagram page to showcase photos of his “wolf gang”. Now, it has over 880K followers, as all people love seeing the wolf gang in action.

He said: “They just make it feel like home. It’s just fulfilling knowing that these guys are happy and loved and well-taken care of. It makes my days worthwhile.”

Jimmy Carter's Solar Farm Is Powering Half His Home Town