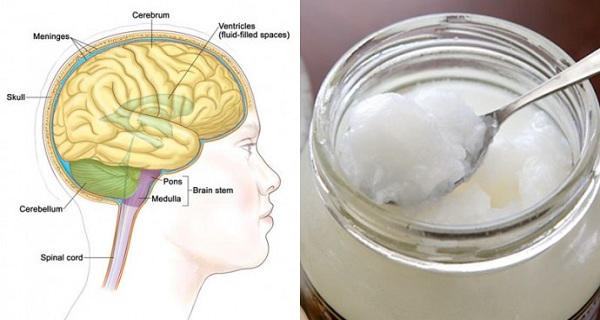 Coconut oil contains beneficial fats, most important of which are Medium Chain Triglycerides (MCTs), which have extremely beneficial effects. In particular, these fats improve the cognitive functions in elder people who suffer from memory loss as serious as Alzheimer’s. The effects of these fats are not felt after a month or a few days, but after a small dosage of 40ml.

A revolutionary study published in the journal Neurobiology of Aging published in 2004 discovered that the administration of medium chain triglycerides (MCTs), which are mainly found in coconut oil, instantly improves cognitive functions in elder people who suffer from memory disorders.

Namely, the study was conveyed on 20 participants who suffer from Alzheimer’s disease or mild cognitive impairment. Participants received either emulsified MCTs or placebo treatment. 90 minutes after the treatment, reserachers followed the significant increase in blood plasma levels of ketone body beta- hydroxybutyrate (beta-OHB).

Dependent of apolipoprotein E genotype of participants, beta-OHB levels either continued to rise or stayed between constant among 90 and 120 minute blood draws in the treatment condition.

Moreover, “higher ketone values were associated with greater improvement in paragraph recall with MCT treatment relative to placebo across all subjects (P=0.02).”

This research gave important discoveries, which were explained as follows:

Subjects fasted from 8:00 p.m. on the night prior to the study visit. They arrived in the morning and blood was drawn to determine plasma β-OHB levels and APOE genotyping (first visit only). Subjects then consumed the test beverage and rested quietly for 90min, after which blood was drawn and a 30-min cognitive testing session ensued. After testing, a final blood draw was taken.”

Nevertheless, the thing that confuses all is the way one dosage of MCTc (40 ml or 2.7 tablespoons) can lead to an instant improvement in cognitive functions in people who suffer from cognitive disorders as serious as Alzheimer’s disease.

The explanation lies in the configuration of MCTs themselves and the specific needs of the brain.

Namely, the primary brain fuel is glucose and when the resistance and suboptimal metabolism (hypometabolism) develop in the brain, it can lead to damage of the function and structure of the brain.

On the other hand, Ketone bodies can supply the brain with alternative fuel source instead of glucose, which can aid in renewing the metabolic processes in the brain. As a result of this, the cognitive functions are instantly improved.

Furthermore, MCTs are different form all other fats we consume. They are smaller in size so they don’t form micelles and do not deposit in the adipose tissue.

Also, more than 97% of the popular dietary fats are made from long-chain triglycerides (LCTs) which have 14 and 18 long chain of carbons, but the chains of MCTs have 5 to 12 carbons, which makes their use and absorption easier. They are oxidized by the liver and if consumed in larger quantities, they increase the ketone bodies.

Coconut oil is high in these advantageous triglycerides, as it has about 2/3rds MCTs by volume.

You can also prepare delicious curry with coconut milk, which contains 25% fats and 66% of that fat is MCT, so you will undoubtedly get a healthy dosage.

You’ve Been Lied To About Butter. This is What You MUST Know