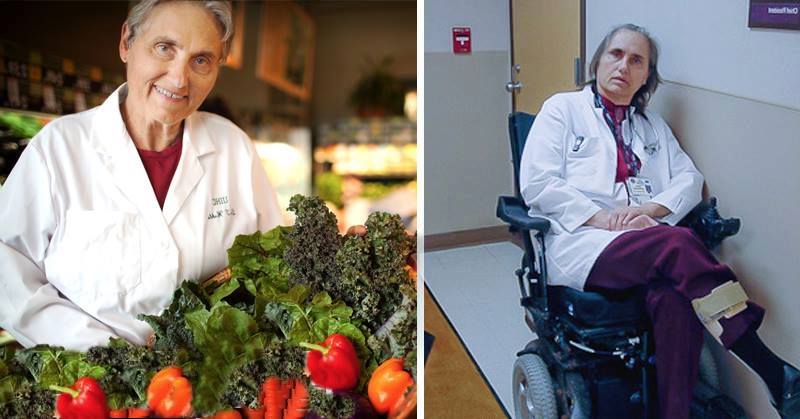 Dr. Terry Wahls has been tied to a tilt-recline wheelchair for four years, as a result of a secondary progressive multiple sclerosis.

However, this brave woman created the Wahls Protocol by using Functional Medicine, and succeeded to reverse her condition. Currently, she no longer uses a cane and commutes by bicycle.

Dr.Terry decided to try and help herself, even though it is considered that there is no cure for Multiple Sclerosis.

“Multiple sclerosis (abbreviated MS, known as disseminated sclerosis or encephalomyelitis disseminata) is an inflammatory disease in which the fatty myelin sheaths around the axons of the brain and spinal cord are damaged, leading to demyelination and scarring as well as a broad spectrum of signs and symptoms.”

This disease influences the potential for communication between nerve cells in the brain and spinal cord to communicate. Namely, the immune system attacks the body and causes damage to the myelin. In the case of loss of myelin, the axons cannot effectively conduct signals.

The mechanisms which drive this process have been studies numerous times, but the exact cause of MS is still unknown. According to some theories, infections or genetics may be the reasons for its incidence, as well as various  environmental risk factors.

In the case of MS, almost any neurological symptom can appear, and is even increased to an extent of physical and cognitive disability.

This disease can appear in various forms, and new symptoms can gradually accumulating over time (progressive forms), or in discrete attacks (relapsing forms).

The medicine knows not a multiple sclerosis cure. There are some effective treatments which aim to prevent disability, return function after an attack, and prevent new attacks.

Moreover, medications prescribed in the case of MS can often cause numerous side-effects or can be poorly tolerated. Therefore, numerous MS patients are trying to find an alternative treatment for their condition.

In the case of Dr. Wahls, we can be certain that she no longer suffers the apparent MS symptoms she did before. Namely, she succeeded in this by rejecting conventional medications, and decided to try a natural  MS “cure.

“Too many of us have spent years, sometimes decades, failing to provide our cells with the building blocks they need to conduct the chemistry of life properly.” ~ Dr. Terry Wahls

The following video, Minding Your Mitochondria: Dr. Terry Wahls at TEDxIowaCity, will make clear a lot of things concerning this case:

She completely restored her wellbeing by following a healthy diet and lifestyle program, designed personally for her brain. Nowadays, she cycles to work every day. This woman is the author of The Wahls Protocol: How I Beat Progressive MS Using Paleo Principles and Functional Medicine and the paperback, The Wahls Protocol A Radical New Way to Treat All Chronic Autoimmune Conditions Using Paleo Principles.

Learn more about her work from her website, www.terrywahls.com, on Facebook (Terry Wahls MD), and Twitter at @TerryWahls. You can also email the clinical coordinator, Cathy Chenard. She can be reached at catherine-chenard@uiowa.edu.

Unusual Signs of Stroke in Women That Nobody Talks About