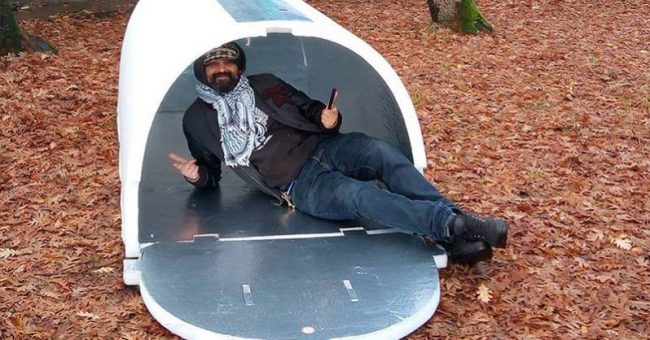 While enjoying the comfort and loving warmth of our home, we rarely think of people who are out there in the cold weather, without having a shelter or a blanket to keep them warm during the night.

Most people feel sympathy for the homeless, but it is not enough to keep them warm.  Actions speak louder than words.  There are over 3,000 homeless people in France, and this winter, the temperatures were shockingly low.

Therefore, a French engineer, Geoffroy de Reynal, MSc in Energy Engineering, got an innovative idea to help these people- a pop-up igloo that can be easily erected to comfortably fit a person.

He was working as a quality manager on wind construction sites, and the terrible conditions in France made him want to rescue the homeless and use his technical knowledge to tackle this social issue.

Working from his own porch in Bordeaux, he created a prototype of the small structure, which was later dubbed the ‘Iglou’, and tested out the first model in a cold chamber on a friend’s farm to determine its efficiency in cold temperatures.

The igloos are made from polyethylene foam, covered with aluminum foil, and both layers protect from the freezing temperatures and keep the igloo around 15° warmer than the temperature outside.

They are private and compact, repairable, recyclable, and waterproof shelters. Moreover, they absorb body heat and solar lighting to naturally raise the temperature inside.

Testing was done with nine Igloos distributed in squats around Bordeaux, France, and people who have tried them did not want to leave. These shelters kept people safe from the wild nights outside and protected from theft and violence.

De Reynal used his own money to build the first igloos this winter, and afterward, he started an online crowdfunding campaign for which he received around $20,000. He said that he built 20 igloos using his own resources and the money from the crowdfunding campaign. He distributed 10 in Bordeaux, and 10 more in Paris.

He was living in Montenegro for a year, and there were not many people living outside, so when he returned to France, he was surprised by the number of homeless in the streets.

Reynal explained that the number of people sleeping rough in the cold in Paris streets shocked him, as in comparison to Montenegro, the country he had returned from,  France is a more advanced country economically.

Therefore, he decided to help them and make life less difficult for the homeless. The target demographic for his burgeoning project was the homeless community who “cannot benefit from the official homeless program.”

Their inventor plants to make them larger and place showers inside as well, and he intends to create thousands of igloos by 2020.  Once more, Geoffroy de Reynal showed that change starts with us as individuals, and we can all try a bit more and achieve much higher goals.