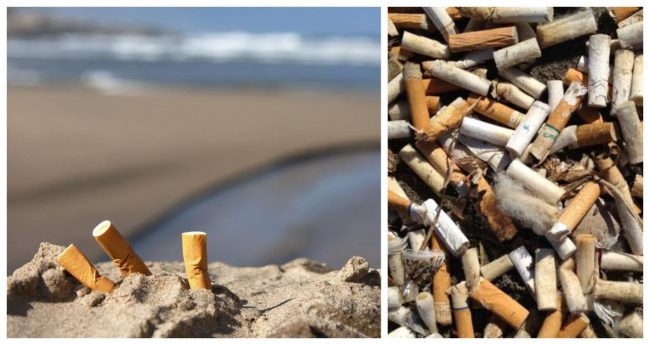 Numerous people are becoming aware of the dangers brought by pollution, especially in the oceans, due to the numerous initiatives and campaigns dedicated to this cause.

We usually think of plastic bottles, cotton buds, straws, and other similar products as the most common items that end up in the oceans, but apparently, the biggest source of waste is cigarette butts!

They are small in size and astronomical in number, so they lead to irreparable damage to the oceans and wildlife, as they are found everywhere, and animals easily ingest them.

Cigarette butts have been reported to be the worse polluter floating in the ocean, and environmental experts explain that they damage habitats, poison fish and cost tax dollars for cleanup and disposal.

Yet, the cigarette industry has remained silent about this issue, so activists campaign to ban cigarette filters.  Cigarette butts are also the single most collected item on beaches worldwide in cleanup operations, with more than 60 million being collected in 32 years.

According to a World Health Organization (WHO) report, cigarette filters were created in the 1950s by the tobacco industry in order to make smoking a “healthier” alternative to unfiltered cigarettes.

According to Thomas Novotny, a professor of public health at San Diego State University, filters are not beneficial in any way, as they are just a marketing tool,  but at the same time, they are a major contaminant, with all that plastic waste.

An assemblyman in California suggested banning cigarettes with filters altogether, but the committee didn’t allow this proposal, just like the idea of a NY senator to return of cigarette butts to ‘redemption centers’ has been delayed.

On the other hand, San Francisco charges a 60 cent fee per pack purchased, which is about $3mil a year in revenue, which are used in beach cleanup projects.

One of the biggest anti-smoking organizations in the US, The Truth Initiative, launched a campaign to with the same goal as the one of the Cigarette Butt Pollution Project, to cut out filters.

According to the reports by the WHO, tossing a cigarette butt on the ground has become one of the most accepted forms of littering on the world and borders on a social norm for a lot of smokers. The reports also showed that about 680 million kilograms of tobacco waste litters the world each year.

Cannabis Tampons Are Here To Save You From Period Cramps