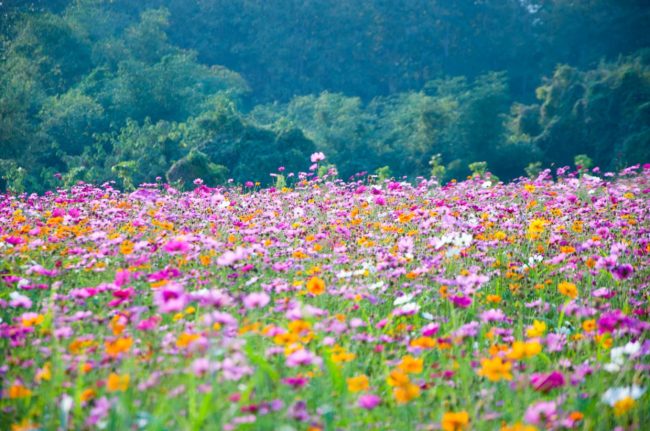 The use of pesticides is a regular practice in the farming and agriculture industry. Crops are treated with chemicals to prevent the attacks of insects, and although they are effective in it, many of them are highly dangerous for the ecosystems and the planet in general.

In recent years, the use of pesticides has sparkled a growing concern over environmental damage.

At the same time, the human population continues to be on the rise, so scientists are struggling to find sustainable ways to grow food, without harming our environment.

To reduce pesticide use in an eco-friendly, Swiss farmers have planted rows of wildflowers among their crops since 2015. They work together with scientists that help them to use wildflowers as a biological pest control.

Yet, according to the Game & Wildlife Conservation Trust, farmers have been successfully adding small grass ridges, known as “beetle banks,” to their fields for decades.

Experiments with so-called ‘flower strips for beneficials’ sown as annual strips in the arable crop with 13 to 16 species of wild and cultivated plants showed that they could be a feasible tool for reducing the pests on the fields.

The concept was initially developed by Matthias Albrecht along with Matthias Tschumi, as a response to the pressure by the public and the government due to the dangerous effects of pesticides on the environment and humans.

It was improved by The Achieving Sustainable Agricultural Systems (ASSIST) program of the UK. These scientists intend to evaluate the efficiency of these wildflowers to attract pests and find sustainable ways to boost food production with minimal harmful effects on the environment.

The project worth £11 million is funded by the UK government.

Scientists guide commercial farmers in the process of sowing wildflower strips in their fields. They use wildflowers as natural pest predators and believe they could reduce the reliance of farmers on environmentally damaging pesticides.

Yet, wildflowers were previously planted around fields instead of through them, so natural predators found it difficult to get to the middle of large fields.

As part of a trial run by the Centre for Ecology and Hydrology (CEH), in the fall of 2017, they planted strips like red clover, wild carrot, oxeye daisy, and common knapweed, through fifteen large, arable farms of central and eastern England, that will be monitored for five years.

The strips are 100 meters (about 109 yards) apart so that the pest predators can access them throughout each field.

Also, to leave the wildflower strips intact year-round, at harvest-time, harvesting machines guided by GPS are programmed to avoid them.

As of now, researchers have found that the more complex the predator and parasite communities, the better the pest-control.

Scientists believe that wildflowers might solve the pesticide problem, so projects of this kind are important as they tackle both important issues at the same time, the preservation of our environment, and food security.

To Help Save Bumble Bees, Plant These Flowers In Your Spring Garden