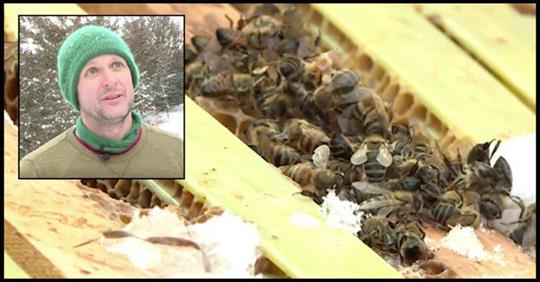 Bees are important for our planet, but their number has declined significantly. The situation is serious, and there are so many organizations trying to save bees. These tiny insects pollinate at least 30% of the crops across the globe.

Well, some people ignore this. The vandalism of a huge bee colony in Sioux Falls, Iowa, shocked the country. Two boy did terrible damage, and they have to face the consequences of their actions.

The owners of Wild Hill Honey went out to check out their beehives on December 28th. There was a lot of snow, and they had to clean it. The scene was shocking. Fifty of their beehives had been destroyed. Over 500,000 bees were dead, and they were lying everywhere around.

Justin Engelhardt, the business owner, had set up a security camera. However, it didn’t help at all. The vandals stole the camera!

Engelhardt lost $60,000, and every hive was knocked over. The vandals broke into the shed, and took the equipment out and destroyed it in the snow. Everything was destroyed.

The Wild Hill Honey called the police. Police officers used fingerprint readers to get the names of their criminals. Believe it or not, all this damage was caused by boys aged 12 and 13.

The kids may get 10 years in jail. They were charged with criminal mischief in the first degree, agricultural animal facilities offenses and burglary in the third degree. The boys were charged with aggravated misdemeanors for possession of burglar’s tools, and may also be fined with $10,000.

Beehives aren’t covered by insurance companies. The Wild Hill Honey owners lost everything. However, the scandal attracted everyone’s attention, and there was a fundraising page. They raised over $30,000 until now, and they will finally get the chance to rebuild their business.

Engelhardt is grateful for all the support they got, and thanked everyone who helped the process.

This is one of the worst bee-related scandal ever. Bees keep disappearing, and we need to do something to save this world. Without bees, we will lose many crops.

This Is How Sand Looks Magnified Up To 300 Times