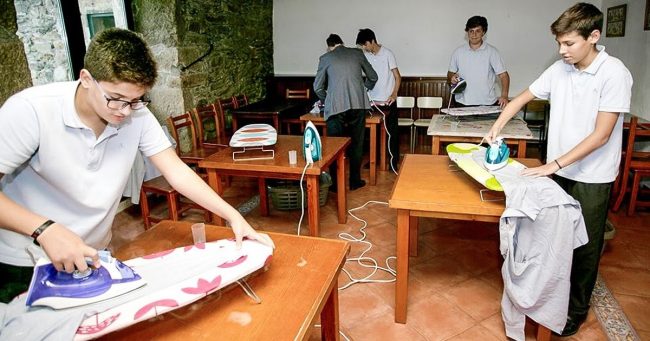 Our mothers and grandmothers like to teach us things like sewing, cooking or ironing. Well, things are different now, and there are schools that actually offer these skills as additional classes.

Students, including boys, are given a chance to deal with the criticism they face when doing “wife” things. The Montecastelo School of Spain is pretty serious about the project, and it has an awesome slogan.

“Equality is learned with actions.”

In 2018, school officials announced their decision to offer students lessons in home economics. Boys got the chance to learn how to iron, sew, cook, and they also learn more about masonry, carpentry, plumbing and electrician skills.

Teachers teach these classes voluntarily, and the initiative is supported by representatives of the school campus and even some of the fathers.

Grabriel Bravo is the coordinator of the establishment. She said these activities are useful for students as they learn new things. This will be really helpful for boys in future, especially when they will have to take care of their own family. Women shouldn’t be the only one to do the dishes or iron. Men can do the same things, too.

The whole thing started when the school administration discussed potential ways of promoting gender equality. They talked to parents and students. Parents were fine with the idea, but students were a bit uncomfortable and skeptical.

When was the last time you saw a boy iron or sew? However, this resistance disappeared over time and boys realized that these activities can be done by men, too.

Some boys held an iron for the first time. Their activities were filled with laughter and fun. Bravo revealed that boys were pretty surprised about their own capabilities.

This is an awesome idea for everybody. Hopefully, other schools will implement it in their programs.

These 10 Illustrations Show Why Living Alone Is The Best