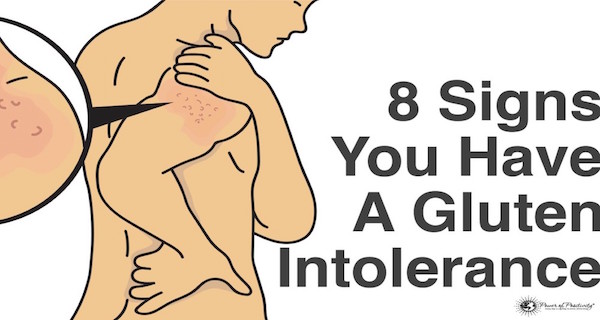 Nowadays, gluten intolerance is a common issue, and causes a reaction as soon as the individual ingests gluten.

Gluten is a protein found in barley, wheat, and rye. The most common signs of gluten intolerance are depression, fatigue, pain and depression.

Wheat is a grain which can be found in bread, pasta and cereal, as well as salad dressings and soups. Rye is a grain type which is included in beer, bread and cereal, and barley is a grain included in stock feed products. All of them include gluten, so they can lead to gluten insensitivity.

Gluten intolerance can further on lead to a disease known as celiac disease, which is classified as an autoimmune disorder and damages the small intestine.

As soon as the person ingests gluten, the body stimulates an abnormal immune response and attacks the intestines, causing damage which reduces the ability of the body to absorb nutrients. Currently, every 1 in 100 people is gluten-intolerant.

Moreover, as soon as you avoid gluten, the signs of gluten intolerance subside. Its most common signs include:

According to medical experts, gluten intolerance may lead to fatigue and exhaustion as a result of inflammation and de-allocation of the energy reserves of the body.

People with gluten intolerance commonly suffer from migraine and headaches. According to a recent study, 56% of the gluten intolerant people experienced migraines, but only 14% of the control group suffered from the same issue.

Gluten intolerance causes inflammation which leads to muscle and joint pain. This pain has been linked to this condition by WebMD and a research published by the Arthritis Foundation.

Brain fog is often a result of celiac disease, and is a common symptom of gluten intolerance. An article under the title “Gluten sensitivity as a neurological illness” published in the Journal of Neurology, Neurosurgery and Psychiatry, showed that immunoglobins, a category of antibodies, show an abnormal reaction to gluten and thus leads to impaired cognitive function.

Sudden weight gain is a common sign of this condition, as well as systemic inflammation stimulated by gluten, due to malabsorption and gut permeability. Therefore, gluten-intolerant people should avoid gluten and their weight will stabilize soon.

The “BMS Gastroenterology” published the findings of a study which suggest that there is a direct link between gluten intolerance and a condition called “aphthous stomatitis”, which leads to mouth ulcers and canker sores. Malabsorption in gluten- intolerant people reduces their calcium levels, and this mineral is essential for healthy bones and teeth.

Gluten intolerance often causes eczema, acne, and dermatitis herpetiformis (DH), which is a difficult condition. This is due to the fact that malabsorption caused by gluten intolerance affects the skin and causes itching, redness, rashes, burning, and blisters.

The Gluten Intolerance Group defines DH as “a chronic disease of the skin marked by groups of watery, itchy blisters that may resemble pimples or blisters.”

Unclog The Drain And Pull Out All The Dirt That Brings Stink Unpleasant Odor! (VIDEO)

The Most Effective Natural Treatment For Varicose Veins!