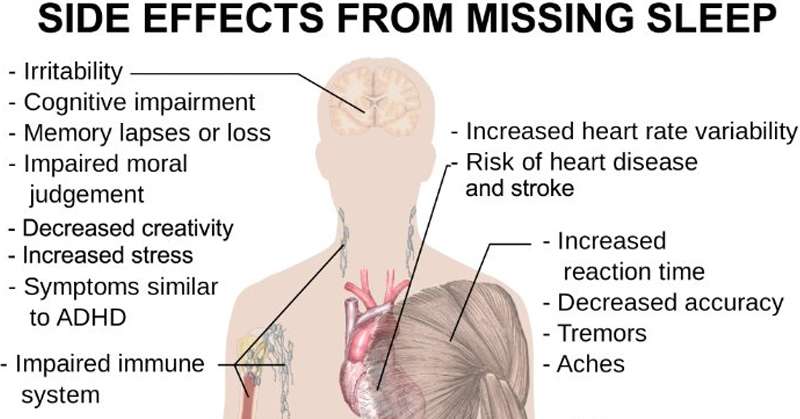 Sleep is of extreme importance for the overall health of the individual, both, mentally and physically. It is a way to recharge after the long and stressful day.

While sleeping, millions of processes continue to happen in the body, helping the brain to store the important data in the memory, and the cells work to repair the damaged tissue and regenerate.

On the other hand, when we lack sleep, all these functions fail to be done on time, and we wake up cranky and have difficulties to concentrate the entire day, but what’s more important, we experience numerous side effects which can significantly endanger our health.

Studies have found that sleep deprivation can cause serious, even life-threatening conditions, from heart diseases, diabetes, to cancer. These are the 6 diseases which are caused by the lack of sleep:

The link between heart problems and the lack of sleep has been suggested numerous times before, but the strongest evidence for the strong correlation has been found by a recent study and presented at EuroHeartCare, the annual meeting of the European Society of Cardiology.

For 14 years, the team of researchers followed 657 Russian men between the ages of 25 and 64 and found that two-thirds of the individuals who experienced a heart attack had a sleep disorder as well.

Moreover, the men who complained to have sleep disorders also had a 1/5 to 4 times greater stroke risk, and 2.6 times higher risk of myocardial infarction.

According to a 2014 study, sleep deprivation, and excess sleep may lead to ulcerative colitis, which is an inflammatory bowel disease manifested by ulcers within the lining of the digestive tract, as well as Crohn’s Disease.

The findings of experts from Massachusetts General Hospital show that the adequate amount of sleep is of vital importance in order to curb inflammation responses within the digestive system which often causes these diseases.

Researchers studied women enrolled in the Nurses’ Health Study (NHS) I since 1976 and NHS II since 1989, and discovered that the risks of ulcerative colitis were raised as sleep per night was reduced to 6 hours or less.

Also, they found that 9 hours of sleep also raised the risks, meaning that the proper amount of sleep is a must in the prevention of these diseases.

Even though the results were found in adult women only, the increased risk of developing ulcerative colitis in the case of sleep deprivation existed despite other factors as well, including weight, age, and habits such as drinking or smoking.

Numerous studies and scientists have pointed out the relation between poor sleep and diabetes, but a team of researchers at the University of Chicago conducted a study which showed the way poor sleep potentially leads to obesity, and ultimately, causes diabetes.

Experts examined the effects of poor sleep on the accumulation of fatty acids, as the fatty acid levels in the blood affect the speed of and the ability of insulin to regulate blood sugar.

They examined 19 different sleeping patterns of men and found that those who slept for 4 hours for three nights had increased fatty acid levels within their blood between 4 a.m. and 9 a.m. which was 15- 30 percent increase over those who slept 8.5 hours every night.

Furthermore, researchers discovered that the increased fatty acid levels led to an increased degree of insulin resistance, which indicates pre-diabetes.

Scientists at Johns Hopkins University conducted a study in 2013 which found that a lack of sleep can cause Alzheimer’s disease and also affect the speed of its progression.

The study was based on previous research that found that sleep is of higher importance for the brain to eliminate the “cerebral waste,” or the buildup which can accumulate and lead to dementia.

The study involves 70 adults between the ages of 53 and 91, and the lack of sleep every night led to a higher amount of beta-amyloid deposition in their brains on PET scans.

This compound has been shown to be a definitive marker of Alzheimer’s, indicating that lack of sleep prevents the brain from removing this form of “cerebral waste.”

The journal Cancer Epidemiology, Biomarkers and Prevention, published a 2013 study which showed that patients with sleep issues had an increased incidence and severity of prostate cancer.

Researchers followed 2,425 Icelandic men between the ages of 67 and 96 for 3-7 years and found that the risk of developing prostate cancer increased in 60 percent of men with trouble falling asleep.

The number doubled in the case of men who experienced difficulty staying asleep. Moreover, people with sleep problems were also more likely to have later stages of prostate cancer.

This link has been attributed to melanin, a sleep-regulating hormone, by researchers.

A 2014 study showed the relation between the increased incidences of suicide in adults and poor sleep, regardless of the previous depression history.

Researchers at the Stanford University of Medicine conducted a study which lasted for 10 years and involved 420 participants ranging in middle to late adulthood.

20 participants who suffered from poor sleep, unfortunately, committed suicide, which led scientists to find that people who consistently had difficulties sleeping were 1.4 times more likely to commit suicide.

The most susceptible to this effect of sleep deprivation were white males, 85 years or older, so scientists attributed the increased suicide rate to poor sleep linked to health issues, and stress increased with age.