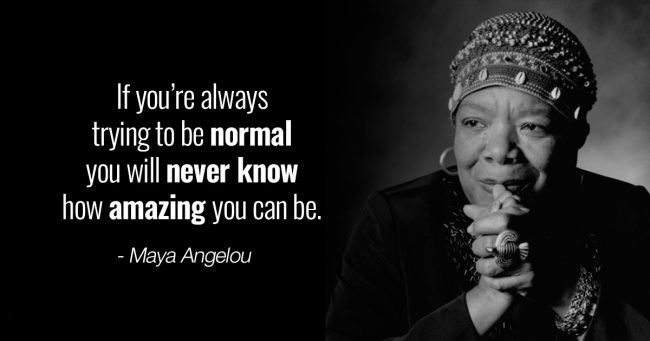 Marguerite Annie Johnson Angelou, known as Maya Angelou, had an inspirational role at the center of American life and remains one of the most beloved and celebrated poets and authors.

He received numerous awards and over 50 honorary degrees, and after reciting her poem “On the Pulse of Morning” at Bill Clinton’s inauguration in 1993, she became the first poet since 1961 to deliver an inaugural recitation, when Robert Frost delivered his poem “The Gift Outright” at John F. Kennedy’s inauguration.

She later won a Grammy Award (best-spoken word album) for the audio version of the poem.

Angelou is best known for her 1969 memoir, I Know Why the Caged Bird Sings, which made literary history as the first nonfiction bestseller by an African American woman.

In 2000 when she received the National Medal of Arts, and ten years later, President Barack Obama awarded her the Presidential Medal of Freedom, one of the country’s highest honors.

She has also received two NAACP Image Awards in the outstanding literary work (nonfiction) category, in 2005 and 2009.

She became known for her seven autobiographies, but she also authored several books of poetry, three books of essays, and many plays, movies, and television shows.

Angelou was also a journalist who worked in Africa, a historian, songwriter, dancer, stage and screen producer, director, performer, and singer.

She took her professional name from a Greek sailor she wed in 1952, Anastasios Angelopulos. She shortened his surname and blended it with her childhood nickname, “Maya. ”

She was one of the most prominent women of the Civil Rights Movement, and devoted her life to being a tireless voice for women and black people.

Maya was also an educator and served as the Reynolds professor of American Studies at Wake Forest University.

In 2013, Angelou was the recipient of the Literarian Award, an honorary National Book Award for contributions to the literary community.

Therefore, we chose 33 powerful quotes of this amazing woman to motivate you and brighten up your day:

3. If one is lucky, a solitary fantasy can totally transform one million realities.

4. A wise woman wishes to be no one’s enemy; a wise woman refuses to be anyone’s victim.

5. Success is liking yourself, liking what you do, and liking how you do it.

6. There’s a world of difference between truth and facts. Facts can obscure the truth.

7. I’ve learned that you shouldn’t go through life with a catcher’s mitt on both hands; you need to be able to throw something back.

8. When someone shows you who they are, believe them the first time.

9. If you find it in your heart to care for somebody else, you will have succeeded.

10. Hate, it has caused a lot of problems in the world, but has not solved one yet.

11. Never make someone a priority when all you are to them is an option.

14. I work very hard, and I play very hard. I’m grateful for life. And I live it – I believe life loves the liver of it. I live it.

15. Whatever you want to do, if you want to be great at it, you have to love it and be able to make sacrifices for it.

16. Courage – you develop courage by doing small things like just as if you wouldn’t want to pick up a 100-pound weight without preparing yourself.

17. You may not control all the events that happen to you, but you can decide not to be reduced by them.

18. We delight in the beauty of the butterfly, but rarely admit the changes it has gone through to achieve that beauty.

19. I’ve learned that whenever I decide something with an open heart, I usually make the right decision.

20. You can only become truly accomplished at something you love.

21. Life is not measured by the number of breaths you take but by the moments that take your breath away.

22. If you don’t like something, change it. If you can’t change it, change your attitude.

23. We need much less than we think we need.

24. If I am not good to myself, how can I expect anyone else to be good to me?

25. Without courage we cannot practice any other virtue with consistency. We can’t be kind, true, merciful, generous, or honest.

26. There is no greater agony than bearing an untold story inside you.

27. I respect myself and insist upon it from everybody. And because I do it, I then respect everybody, too.

28. Determine to live life with flair and laughter.

29. I’ve learned that I still have a lot to learn.

32. If you’re always trying to be normal you will never know how amazing you can be.

33. Seek patience and passion in equal amounts. Patience alone will not build the temple. Passion alone will destroy its walls.

Cyntoia Brown, Convicted at 16 of Killing Her Sex Trafficker, Released From Prison After 15 Years