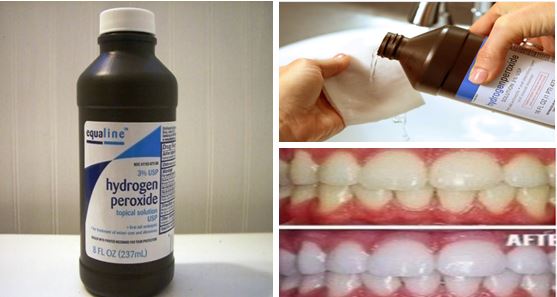 Hydrogen peroxide can be used in various ways in your home. It is an inorganic chemical compound composed of 2 hydrogen and 2 oxygen atoms, whose main use is as a disinfectant, due to the fact that it is a strong oxidation agent. It is a very powerful chemical for killing all kinds of germs, including bacteria, viruses, and fungi.

This article lists 24 of the most common practical applications of hydrogen peroxide:

The combination of hydrogen peroxide and vinegar is in fact a cheap, viable and non-poisonous disinfectant agent and is said to be more viable at destroying pathogens than bleach.

As it is non-toxic, it can be used for cleaning the cooking and food preparation areas. In tests conducted at Virginia Polytechnic Institute and State University, pairing Vinegar and Hydrogen Peroxide mists, kills virtually all Salmonella, Shigella, or E. Coli bacteria on heavily contaminated food and surfaces.

Put the piece of meat, fish or poultry in a casserole, cover with a diluted solution of an equal part of water and 3% H202, and leave it thus covered in the fridge for 1/2 hour. Then, rinse and cook the meat has usual.

It can also be used for meat sanitizing, so you should rinse off your meat with it before cooking.

Use as a vegetable wash or soak to kill bacteria and neutralize chemicals. Add 1/4 cup of 3% H202 to a full sink of cold water. Soak light-skinned (light lettuce) 20 minutes, thicker skinned (like cucumbers) 30 minutes. Drain, dry and refrigerate. This will prolong their freshness.  If time is a problem, spray vegetables (and fruits) with a solution of 3%. Let stand for a few minutes, rinse and dry.

In order to keep the leftovers of your salad, spray them with a solution of 1/2 cup water and 1 tbsp. 5% hydrogen peroxide. Drain, cover and refrigerate.

7.In the dishwasher
In order to disinfect your dishwasher, add 2 oz. Of 3% Hydrogen peroxide to your regular washing formula.

Clean your counters and table topics with hydrogen peroxide to destroy germs and leave a fresh smell. You just have to put a little on your dishrag when you wipe, or spray it on the counters.

Fill a spray bottle with a 50/50 mixture of 3% hydrogen peroxide and water and keep it in every bathroom to disinfect without harming your septic system like bleach or most other disinfectants will.

After rinsing off your wooden cutting board, pour or spray hydrogen peroxide (and then vinegar) on it to kill salmonella and other bacteria.
Keep a spray bottle of 3% (straight) to clean the inside of the fridge and kids’ school lunch boxes.

You can likewise utilize hydrogen peroxide to clean glass and mirrors with no smearing. Use it in the bathroom to disinfect the counters, toilets, floors, and so on.

Directions:
It is best to utilize two spray bottles instead of blending the solutions together. Put straight vinegar in one and straight Hydrogen peroxide in the other spray bottle. When you want to sanitize a surface (vegetables, cutting board, counters, sink, cages, toys, toilets, floors, etc.), spray one on the surface, then you spray on the other.

When they mix, for a brief time the chemical action of the two make a very powerful sanitizer. You can rinse off the surface afterwards, if you want, but the result is non-toxic. Fortunately, it is cheap.

In order to clean the air, use 1 pint 3% hydrogen peroxide to 1 gallon of water in a humidifier or steamer.

Peroxide is an excellent alternate solution to keep those garments white. Likewise, when chlorinating clothes, they tend to wear out faster – peroxide will not do that. Add a cup of hydrogen peroxide rather than bleach to a load of whites in your clothing to whiten them. In the event that there is blood on the clothing, pour it directly on the dirty spot. Leave it to stay for a minute, then rub it and wash with cool water. Repeat if necessary.

3% Hydrogen peroxide is a compelling stain remover if used on time, not very late– despite the fact that blood stains as old as 2 days, they have been effectively lifted with Hydrogen Peroxide.

Although it will bleach or discolor many fabrics. If a little peroxide is poured onto the stain it will bubble up in the area of the blood, due to a reaction with a catalyse. After a few minutes the excess liquid can be wiped up with a cloth or paper towel and the stain will be gone.

3% H2O2 must be applied to clothing before blood stains can be unintentionally “set” with warm water. Remove the peroxide treated blood with some water and soap afterwards. Yet, note that Hydrogen peroxide can bleach or discolor many fabrics.

Unconventionally, people use hydrogen peroxide for a great number of purposes, such as teeth whitening, enema, contact lenses cleansing, and hair lightening.

Peroxide, being a bleaching agent, can also be used for hair lightening. Dilute 3% Hydrogen peroxide with water (50/50) and then spray the solution on your wet hair after a shower and comb it through. You will have natural highlights if your hair is light brown or dirty blonde, and there’s no need to worry, for the hair will lighten gradually in this way.

You do not need to pay for professional whitening no more, for you can now 3% hydrogen peroxide, teeth will be significantly whitened in some time.

Ear wax, or cerumen, accumulates in the external auditory canal with time and clots the passage of sound to the tympanic membrane. In this case, a 3% hydrogen solution is sometimes enough to dissolve the clot, but in severe cases, water jet propulsion device is used to get the clot out of the ear canal.

After applying a few drops of hydrogen peroxide solution into the ear canal, you will feel crackles in your ear which means that ear wax is getting dissolved.

An interesting thing about this antiseptic is the ability to create foam in contact with the enzyme called catalase, which is released from damaged cells, especially blood cells. After the hydrogen peroxide treatment, if foam reappears on the wound, it may be a sign of a bacterial infection of the wound.

Here’s Why You Should Massage Your Feet Every Night Before Going To Bed!