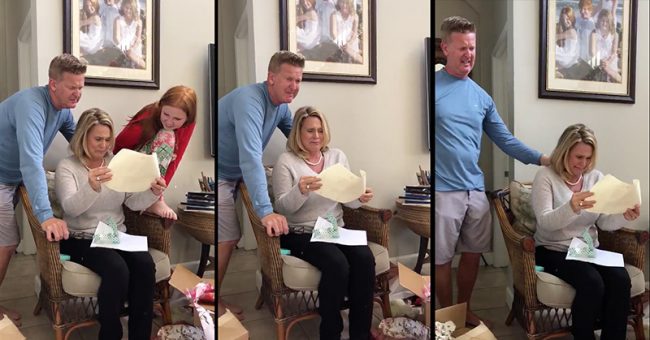 Christmas is all about giving. The baby Jesus, which was a gift from God to the world, received the gifts of Frankincense, Gold, and Myrrh, each of them carrying its own meaning.

Christmas time is an opportunity to help others, especially those in need. It is an ideal opportunity to show others how much they care to us, how much we appreciate the love they have been giving to us.

A 21-year-old boy, Pavin Smith, understood the symbolism of Christmas, and decided to gift his parents their own home for the holiday.

Pavin paid off his parent’s mortgage for them for Christmas, as a way to thank them for the love and support they gave to him while he was growing up.

During the holidays, he gave his family a heartwarming letter that explains his gift, rolled up like a scroll.

Thank you for everything you have done for me! This doesn’t make up for any of it. Love you both so much. Our home is finally all YOURS. Merry Christmas! pic.twitter.com/h9wog2HfHv

In the letter, he wrote how much they mean to him, and recorded them while reading it. The note included words from Robert William Service’s 1912 poem Home and Love, and it read:

“ Thank you for raising me in a great home filled with love. Because of all the sacrifices you made to get me where I am, I want our family home to be yours.”

The Smith family was ecstatic!

His parents were emotional and tried to hide their tears while reading the letter their son wrote, telling them that he realized that his family helped him achieve everything in life.

The home is finally yours! All the lessons, all the travel. I am so thankful. I wouldn’t be where I am today without you. I love you both so much! Merry Christmas

For many years, Pavin played baseball and eventually went pro.

He played college ball with the Virginia Cavaliers with the University of Virginia, and a sophomore, he hit eight home runs and had 13 home runs as a junior.

After the surgery for his ulnar collateral ligament injury of the elbow he experienced, he worked hard and made his professional debut with the Hillsboro Hops, a minor league affiliate of the Diamondbacks.

In the 2017 draft season, he was the Arizona Diamondbacks’ first-round pick in 2017, so he signed with the team, and he got a $5 million bonus, which then paid for the mortgage.

Yet, those who know him, claim that Pavin’s act of gratitude does not surprise them. Brian O’Connor, Smith’s baseball coach at the University of Virginia, commented:

“I just think that takes an incredible amount of maturity for a 21-year-old, but it doesn’t surprise me. That’s how he’s lived his life. That’s how he was brought up. That’s the values that he has.”

His mother, Pam, admitted that Pavin made their life much easier, and they can now take trips to see their son play in the minor leagues:

“It’s definitely a big blessing. It took a lot of stress off. It’s really nice not to have to worry about it every month. It was a gift for the whole family. One hundred percent that’s how I look at it.”

It's Move-In Day! Homeless Veterans Arrive At Their Village Of Tiny Homes