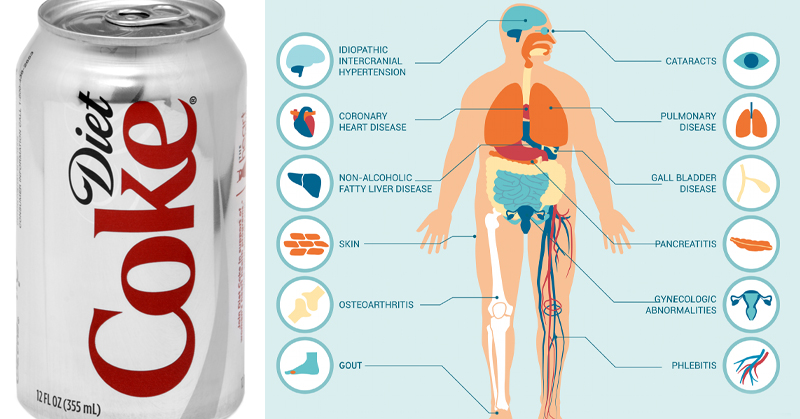 Diet soda is definitely among the largest marketing scams of all time!

Namely, its manufacturers actually convince customers that it is a healthier option of the drink they love, so they charge them more, and actually worsen their health even more!

Researchers at the University of Iowa conducted a study which finally revealed the entire truth behind diet drinks. The study which lasted for more than 9 and a half years, was led by Dr. Ankur Vyas, and involved about 60,000 participants.

The aim was to analyze the effects of aspartame, the artificial sweetener used instead of sugar in diet drinks. And the findings were shocking!

These results were found after researchers adjusted their data to account for other risk factors such as physical activity, age, BMI, and smoking.

According to Dr. Vyas, “This could have major public health implications.”

And he’s right, as 1 in 5 Americans drinks diet soda on a daily basis, which is over 5 million people, or  17% of the entire population!

The modern scientific principle (correlation ≠ causation) used at the University of Iowa study does not draw a definite relation between aspartame and cardiovascular disease, but the connection is easily specified using other medical knowledge.

According to Dr.Mercola, the consumption of aspartame during pregnancy greatly raises the baby’s risk of obesity, which is the major factor for cardiovascular issues.

Aspartame also leads to depression, which is a perfect environment for heart problems. Depression also supports habits which lead to cardiovascular diseases, such as lack of physical exercise, smoking and alcohol abuse.

Aspartame leads to numerous other health risks, such as:

Another interesting fact is that about 75% of all food complaints the FDA receives annually are linked to aspartame. Therefore, if you are a huge fan of soda drinks, at least consume the regular variety.

The following video from Dr. Mercola will explain more about the side-effects of aspartame:

The Ancient Oil That's Been Used to Help Fight Migraines, Depression, Anxiety and Cancer for Thousands of Years